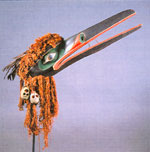 
Jonaitis documented the American Museum of Natural History's world renowned collection of Northwest Coast Indian art in From the Land of the Totem Poles: The Northwest Coast Indian Art Collection at the American Museum of Natural History (D&M 1988) and wrote The Yuquot Whalers' Shrine (D&M, 1999). As director of the University of Alaska Museum of the North and professor of anthropology at the University of Alaska Fairbanks, she provided a comprehensive survey entitled Art of the Northwest Coast (University of Washington Press 2006), in which she argues against the commonly held belief that Aboriginal artistic traditions and techniques went into decline during the post-contact period.

In her Discovering Totem Poles: A Traveler's Guide (Douglas & McIntyre, 2012) $19.95, Aldona Jonaitis introduces fifty totems that can be visited in communities along the Inside Passage, from Seattle to Juneau. It ends with the Alaska Centennial pole erected by carvers Nathan Jackson and Steve Brown in 1980, ridiculing Uncle Sam for the insulting and destructive actions of a U.S. Navy vessel in 1882. A Tlingit pole in Tongass, Alaska, circa 1920, similarly recalled the insensitive and ignorant behavior of Secretary of State William Seward, who purchased Alaska. "In 1869, Chief Ebbetts of Tongass Village hosted an elaborate potlatch for William Sayward," writes Jonaitis, "who never reciprocated, a grievous social failing. So the Chief raised this pole, which portrays this ignorant man sitting atop a box to display his boorish behavior." At its outset, Discovering Totem Poles dispels various misconceptions. Poles were never worshipped, nor were they considered sacred,and the concept of "low man on a totem pole" is meaningless. "The position of an image on a totem pole," Jonaitis writes, "has no relevance to its importance... a crest being is not the ancestor of a clan, nor is it necessarily taboo to eat." 978-1-926812-85-4

From the Land of the Totem Poles: The Northwest Coast Indian Art Collection at the American Museum of Natural History (D&M 1988).

Art of the Northwest Coast (D&M, University of Washington Press 2006).