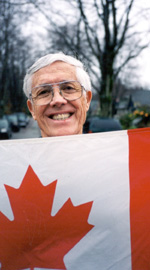 
In a varied compendium called Lions in our Lives, self-publisher Terry Julian produced a lively little tome about the carnivorous quadruped with the shaggy mane that lives only in Africa, but resonates through literature and architecture around the world. Julian includes chapters on literary references, heraldry, heroes and religion. He also notes that lions are everywhere in Lower Mainland of British Columbia. The B.C. Lions football team. Lions Bay. Lion Island in the Fraser River. The Lions beyond Grouse Mountain. And there are Royal Bank insignia lions. Lions outside the Vancouver Art Gallery, at the entrance to Lions Gate Bridge. Lions on the Terry Fox statue, lions at the Carnegie Centre.

Julian earlier published an appreciation of Captain William Franklyn entitled A British Lion. Born in 1816 in Greenwich, Franklyn came to Nanaimo in 1860 to provide law enforcement. James Douglas appointed him as a magistrate in 1860 but he fell from favour due to political intrigue and died on April 3, 1874. Julian has also written a useful account of why the capital of British Columbia was moved from New Westminster to Victoria (A Capital Controversy), plus a book about sober-minded but constructive patriotism entitled Improving Canada's Democracy. Julian once ran in politics for the federal Liberal Party but was not elected. His son Peter later became a member of parliament for Burnaby-New Westminster.

Passionate about the rights of citizenship within democracy, Terry Julian has devoted one of his independent titles to examining the validity of polls within modern media. In The Seduction of Surveys In Canada's Federal Elections (Signature/Trafford), he writes, "We are surrounded by electronic fortresses that shoot millions of media arrows which prevent us getting inside to obtain truly scientific and accurate data."; Or, more succinctly, as the slogan for that George Clooney movie Michael Clayton puts it, the truth can be adjusted.

Of Irish descent, self-publisher Terry Julian was born in Vancouver on August 7, 1922. He was a high school administrator who received his B.A. from UBC, his B.Ed from UBC and his M.A. from Northwestern. In 2002, Terry Julian was a recipient of the Queen's Jubilee Medal. He came first in his age category for the Vancouver Sun Run in 2005, in the same year he published his book about the Christian emperor Constantine the Great, founder of Istanbul, who brought prosperity and order to the Roman and Byzantine worlds until his death in 337 A.D.

Julian's most 'lightweight' book is Be Amusing: Helpful Hints to Make You a More Humorous Person, a potpourri of one-liners, anecdotes, puns, lawyer jokes, ethnic jokes, political wit, quips, aphorisms. Laughter, Julian says, is inner jogging. To wit: There once lived a court jester who drove everybody crazy with his compulsive punning. One day the king could stand it no longer. 'Enough!' cried the king. 'Hang the fool!' But as the noose was being drawn around the punster's neck, the king had a change of heart. 'I'll free you on one condition: that you never make another pun as long as you live.' 'That I promise to do, your Majesty,' said the jester. 'No noose is good noose.' So they hanged him.

Book Collecting for Everyone (Signature Publishing, 1992)

Be Amusing: Helpful Hints to Make You a More Humorous Person (Signature Publishing, 2000. $19.95)

Lions in our Lives (Signature Publishing, 2004).

Articles: 1 Article for this author
Constantine, Christianity, and Constantinople
Info


Helena, mother of Constantine the Great, the Christian ruler who brought prosperity and order to the Roman and Byzantine empires during his 21-year-reign, was possibly a Sicilian barmaid. She later became pious and revered as the alleged discoverer of Christ's cross in Jerusalem. It's just one of the details explored by Terry Julian in his eighth non-fiction title, Constantine, Christianity, and Constantinople (Trafford $19.95). Constantine was not baptized until he lay on his death bed because, according to Julian, "Baptism in those days was taken very seriously and it was common to defer it as late as possible so that there was less chance of committing mortal sin subsequently."; 141207003-1