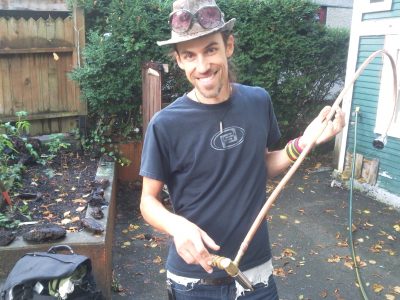 Kalnins is based in Vancouver where he bio-intensively gardens, builds mobile bike-based sound systems, freestyle raps, develops his skills in mycology, and is co-director of the newly founded BC Tea Growers Association. His past works in the arts contributed to the early formations of locative media art in Canada. In 2001 Karlis founded the Locative Media Lab with Marc Tuters to explore the field of user generated cartography. These efforts resulted in GPSter (2001), Geograffiti (2002) and Where-FI (2003). His work has been presented internationally at conferences and new media festivals including: IMPAKT (Utrecht), Media Architecture (Riga), Collaborative Cartography (London), VSMM (Berkeley + Montreal), Next 5 Minutes, E-Culture Fair (Amsterdam) and others.