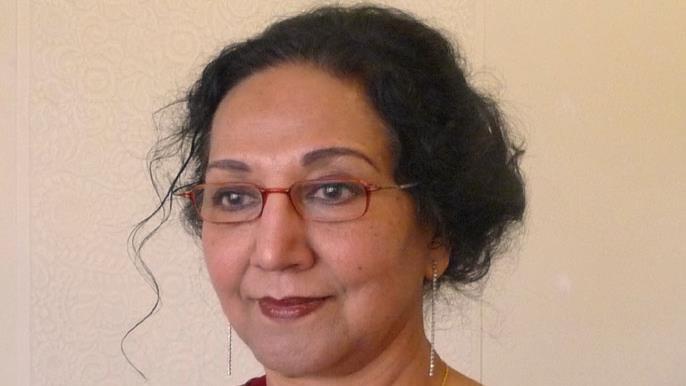 
In 2014, Surjeet Kalsey was accorded a lifetime achievement award as part of the Harjit Kaur Sidhu Memorial Program. The award is given annually to a British Columbia Punjabi author by the Asian Studies Department of the University of British Columbia. [See below] On April 11, 2015, the Abbotsford Arts Council awarded Surjeet Kalsey for an Outstanding Contribution to Literary Art for the 11th Annual Arty Award.

Born in Amritsar, Punjab, Surjeet Kalsey received her M.A. in English and Punjabi at the Punjab University Chandigarh. She afterwards worked as a radio journalist at All India Radio as Punjabi Regional News Anchor and came to Canada in 1974. She 'started life all over again' after her marriage in 1973 with Ajmer Rode., a computer engineer from Canada. Having attained her creative writing degree in 1978, Surjeet Kalsey has worked as a freelance interpreter and translator, as well as a writer, whose work has appeared in various anthologies and magazines in Canada and in India. She has recited her poetry at many venues, including the Harbourfront Reading series in Toronto. After obtaining her M.Ed. in Counselling Psychology at UBC, she has been employed as a family therapist and has taught part-time in conjunction with her Court Interpreting Certification (bi-lingual component) at Vancouver Community College.

A collection of Plays- Behind the Palace Doors, 2002. Raghbir Rachna Parkashan, Chandigarh, India.


Indo-Canadian poet and author Surjeet Kalsey has been honored with the Writer's Lifetime Achievement Award in recognition of her contribution to Punjabi literature, language and culture in Canada.

The award, a part of Harjit Kaur Sidhu Memorial Program, is given annually to a British Columbia Punjabi author by the Asian Studies Department of the University of British Columbia.

The Harjit Kaur Sidhu Memorial Program celebrates the rich life of Punjabi language and culture and its importance in BC, a province located on the West Coast of Canada.

Kalsey came to Canada in January 1974, bringing along her rich experience in All India Radio broadcasting, writing, journalism and translation.

She writes both in Punjabi and English and is the author of 19 books of poetry, short stories, drama, and translations, and has edited several books.

Her poetry books in Punjabi include "Paunan Nal Guftagoo";, "Aurat, Shabad te Shatkt";, "Rom Rom Vich Jagdey Deevey";, "Naam Tiharey";, and the forthcoming "Rung Mandal";. Her poetry books in English include "Speaking to the Winds";, "Footprints of Silence";, "Sand-Scape"; and "Colours of My Heart";.

She has three books of short stories to her credit - "Sat Paraiyan";, "Ik Parvasi Aurat di Diary"; and "Katha Teri Meri"; as well.

As a social activist, Surjeet has worked intensively in the community to raise awareness about violence against women and children. It's primarily for this reason that her short stories and drama reflect on women's issues.

Her three-act play "Mehlin Wasdiyan Dhiyan"; (Daughters Behind the Palace Doors) was the first play which established theatre for South Asian women in Canada in the late seventies to address the unspoken issue of violence against women in the South Asian Community in Canada.

Kalsey is one of the woman founder members of the Punjabi Literary Association Vancouver in the early seventies and has been a member since. She also won Canada's Best Writer's International Network (WIN) Award in 2013.

The Award Ceremony will take place on May 1 at New Surrey City Hall, Surrey.
The Indian Diaspora