There are more than 250 Indigenous B.C. authors included on the ABCBookWorld reference site, and easily more than 2,000 books pertaining to Indigenous cultures of B.C. It's a bountiful harvest, largely unrecognized by the world at large, as well as by the rest of Canada. Even within British Columbia, the extent to which the publishing industry of British Columbia, and B.C. writers, have heroically uplifted the concerns and intricacies of Indigenous culture is not appreciated.

Highlighting the emergence of Indigenous Authors for an Indigenous Literary Map of B.C. is the like the proverbial tip of the iceberg. Anyone who cares to look below the surface by navigating through the depths and breadth of the ABCBookWorld site for weeks on end will eventually come to realize how much the indigenous cultures of B.C. owe to mostly non-indigenous academics and other writers, as well as non-indigenous publishers. If that statement strikes the reader as politically incorrect, so be it. It happens to be true.

I have included only three non-Indigenous authors on the Indigenous Literary Map of B.C.  They are Hubert Evans, Sylvia Olsen and Karen Charleson. -- A.T.

Karen  Charleson is a member through marriage of the House of Kinquashtakumtlth and the Hesquiaht First Nation on the mid-west coast of Vancouver Island. She has lived in Hesquiat Harbour on the west coast of Vancouver Island, with her husband Stephen Charleson, for over 45 years. A mother of six, as well as a grandmother, she has also operated Hooksum Outdoor School with her husband, near Tofino. Both Charleson and Olsen married Indigenous men and lived extensively on First Nations reserves while raising their children.

Karen Charleson's debut novel Through Different Eyes ranks among the best and most realistic about First Nations societies of B.C. In an interview with Charleson in November 2017, in Ha-Shilth-Sa (Canada's oldest First Nations newspaper, published in Port Alberni by the Nuu-Chah-Nulth Tribal Council), reporter Shayne Morrow asked Charleson about the genesis of Through Different Eyes. "I was thinking of two very concrete things as I wrote the novel," she said. "One, I wanted to tell a positive story about 'ordinary' daily life as it is lived by the people who have known this area as home for countless generations here on the West Coast. The other was to show the enduring strength and central importance of family. I do not specifically name Nuu-chah-nulth or any First Nation in the novel, but I think that anyone who reads it will easily be able to recognize Nuu-chah-nulth attitudes, perspectives, and ways of doing things in the community and family."

Set in the fictitious towns of remote Kitsum and Port Hope (population 1,000) atop Vancouver Island in the mid-1980s, Through Different Eyes (Signature $19.95) mainly depicts the emotional lives of women in the Joe family, beset by two unplanned pregnancies.

Everyone knows everyone's business in Kitsum. It's hard for sixteen-year-old Brenda Joe to keep her pregnancy secret, but she can at least withhold the identity of the father. Before she can undertake the arduous trip to Campbell River to give birth, her favourite aunt, Monica, comes for Christmas.

University-educated and beautiful, Monica, 27, was the star pupil at Kitsum Elementary when it opened in 1967. Eight years later the forest company made a road connecting Kitsum to Port Hope, so she could attend high school an hour from her home.

Monica got out. She climbed the social ladder of Vancouver. She became exotic arm-candy for her white partner, Saul, who considered himself to be one of the few anthropologists who truly understood Native peoples. Saul wants them to move to Ottawa.

But Monica decides to ditch Saul, quit her office job at Indian Affairs, and return to her humble Kitsum roots, taking a low-paying job at the local school in order to help her sister, Ruby Joe, look after her daughter Brenda. Monica and Ruby have been especially close ever since they lost both parents in a car accident on the treacherous road to Port Hope.

This classic, Thomas Hardyesque "return of the native" scenario has very unexpected consequences. After Brenda confides to Monica that the father of her out-of-wedlock child is the handsome loner Michael Clydesdale from the raucously partying Clydesdale family, Monica takes it upon herself to confront him.

"I was tired of trying to 'explain' to people what life was like on the West Coast in a small native community," says Charleson. "I thought I might be able to show people something of the wealth of family and community that lives here."

Charleson credits six months working with an editor, West Coast poet Garry Thomas Morse, for bringing her novel to fruition. Charleson succeeds in making the reader care about every individual she portrays. This story of dignity and perseverance rings true on every page by continuously conveying how people feel.

"The writing is flawless," critic David Stouck has responded, "and the storyline smoothly paced. Despite its somewhat dated aspects, Charleson does a beautiful job of constructing this narrative to render sympathetically a story she has observed closely."

Cumulatively, Through Different Eyes stands as a testament as to how it's the women in Kitsum who preserve and foster community.

"No one locally seems to have any problem with Through Different Eyes," Charleson told BC BookWorld. "In fact, I can't help but feel humbled and honoured by the numbers of local people who are buying, reading and saying good things about the book. By local, I am talking about all the areas of Vancouver Island where Nuu-chah-nulth people live."

Karen Charleson had published three science textbooks with McGraw-Hill Ryerson and had numerous articles and essays appear in such diverse publications as Canadian Geographic, the Globe and Mail, the Vancouver Sun, and Canadian Literature. She holds an MA in Integrated Studies from Athabasca University.

"I am fully expecting to get some kind of flak at some point about writing about Indigenous people and communities without being Indigenous myself," Charleson said. "I'd like to say that I am ready for that attitude or argument, but I will deal with it when it comes. I am confident in what I know, and confident as a member of my own family, so I will be fine." 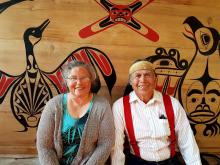