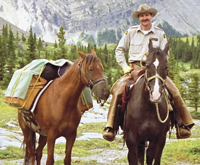 
Born to the Wild: Journals of a National Park Warden in the Canadian Rockies by Rob Kaye (Grey Wolf / Sandhill $21.95)

It's hard not to think of those goofy Kokanee beer commercials when one thinks of park rangers.
So how does a Dudley Do-Right Parks Canada warden-complete with'80s-style, quasi-cop moustache-end up with a self-published memoir on the BC Bestsellers List from August to October?

Rob Kaye's Born to the Wild: Journals of a National Park Warden in the Canadian Rockies makes it obvious that park wardens are akin to another endangered species-lighthouse keepers.

After telling his requisite grizzly stories-and his elk, bighorn sheep, mountain goat, avalanche, beaver, glacier, wolf and horse stories-Kaye tells us that in the late 1960s, eight of the 13 districts of Jasper National Park were phased out "as a result of centralization."; Wardens were no longer assigned to a specific district but instead were required to work throughout the park.

As of 2013, wardens were no longer assigned to backcountry postings.

"Very few now have the skill set and training to manage the park's expansive backcountry postings,"; he writes. "Many warden cabins in Jasper and other Canadian Rocky Mountain national parks are now in a state of disrepair and slowly fading into the past, much like the traditional role of the backcountry warden.";

As a tyke who was born in the Rockies and grew up in Jasper, Rob Kaye knew he had to become a park ranger when a senior park horseman, who was wooing his wife-to-be, Rob's older sister, hitched his horse to a tree in the yard.

"I wanted a horse,"; he says, "just like his.";
After his 33 years as a park ranger, Kaye retired in 2010 and now lives in Qualicum. He worked mostly in Jasper National Park, straddling the B.C./Alberta border, with a one-year sojourn to work in Australia.
In the old days, a dedicated parks official could make a difference. When Kaye transferred to the 194-square-kilometre Elk Island National Park, one hour's drive east of Edmonton, back in 1989, it was one of the few protected areas representing the last ten percent of Canada's aspen parkland ecosystem-a bird watcher's paradise.

For sixteen years Kaye coordinated an elk management system. There were similar programs for the protection and propagation of wood bison and plains bison. By 2014, Elk Island had provided 885 wood bison, 1088 plains bison and 4690 elk to conservation initiatives in Western Canada, Alaska and the Republic of Sakha in Russia.

This is what a park ranger can do.

"Employees, frustrated with having to squeeze funds out of shoestring budgets,"; he writes, "mourned the loss of their peers. They were left looking over their shoulders, wondering who would be next.";
Kaye believes Parks Canada desperately needs to re-evaluate its support of commercial and private interests that contradicts its own policies. He gives specifics about the degradation of services.

He claims only three part-time resource management specialists now cover Jasper's 10,860 square kilometres of area zoned as wilderness that comprises 97 percent of the park's total area. The horse herd has been cut from 65 to 30, with more downsizing imminent. Backcountry trails will soon become impassable without maintenance; untended warden cabins are aging beyond repair.

"Successive governments-of which the Harper government has been by far the worst offender-have largely ignored the value of the environment, placing national parks in peril.
"Prime Minister Harper has declared war on science, particularly studies related to nature and the impacts of human activities.

"In a society structured around economic growth with minimal consideration towards environmental responsibility,"; Kaye writes, "our governments continue to value commercial interests over the long-term ecological, social and economic benefits of protecting wilderness.";