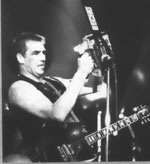 
As punk rocker Joey Shithead, Joe Keithley was inducted into the Canadian Independent Music Hall of Fame in 2004. Raised in Burnaby, he is the author of I, Shithead (Arsenal 2004), a biography that chronicles the rise of punk rock and political activism within the pop music industry of Canada from his vantage point as the frontman for the group D.O.A. (Dead On Arrival). It is into its third printing as of 2017.

He has been called Canada's godfather of punk. As a political activist he once ran as a candidate for the Green Party. A founder of Sudden Death Records in 1978 to release Disco Sucks, he lives in Vancouver with his wife and their three children. His band and his label have endured for at least 30 years with the motto - "Talk Minus Action Equals Zero" - a graffito that encapsulates much of the zeitgeist of the punk movement. Keithley is featured prominently in the feature-length documentary American Hardcore, which debuted at the Sundance Film Festival in January of 2006 prior to its limited release across North America in October of 2006.

Review of the author's work by BC Studies:
Talk-Action= Zero: An Illustrated History of D.O.A.

Articles: 1 Article for this author
I, Shithead: A Life in Punk (Arsenal $21.95)
Article


Joe Keithley is a living legend. Like Rick Hansen. Or Terry Fox. But for a decidedly different demographic. Formed in Burnaby in 1978, his punk rock band D.O.A. has 11 full-length albums. True to their motto TALK-ACTION=ZERO, they have performed in support of Greenpeace, women's rape/crisis centres, prisoner rights and anti-nuke and anti-globalization organizations. D.O.A. has toured with Nirvana, The Clash, The Ramones, The Dead Kennedys, Black Flag and Minor Threat. They've influenced The Red Hot Chili Peppers, Green Day and The Offspring. The band's founder is Joe Keithley, a.k.a. Joey Shithead. In 1996, Keithley ran as a Greenpeace candidate in provincial and civic elections. With an introduction by Jack Rabid, music producer and publisher of the New York music magazine Big Takeover, I, Shithead: A Life in Punk (Arsenal $21.95) is Keithley's recollection of a life in activism and music. 1-55152-148-2