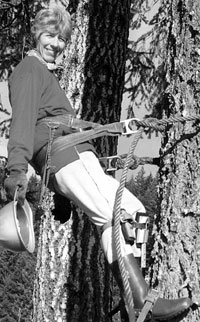 
Heather Kellerhals-Stewart was born in Toronto in 1937. She grew up in Toronto and has also lived in Kingston, Edmonton and Vancouver. She graduated from U. of T. in English Language and Literature. She studied Social Work at U.B.C. and now lives with her husband, Rolf, on Quadra Island where they have a farm and a Woodlot Licence. She raises geese and has an organic garden.
She likes to juggle, hike and ski, resulting in her YA adventure novel about search & rescue, SAR: Powderhounds, the story of a novice SAR worker named Chic who must rescue a hotdog skier and his girlfriend after the male skier foolishly skis out of bounds. She simultaneously self-published a children's picture book, Oh No Noah (2013).


Muktu the Backward Muskox (Chauntaluf $7.95) is the updated paperback edition of Heather Kellerhals-Stewart's story of how a young muskox outwits a big-city hunter, illustrated by Karen Muntean. 0-9686209-0-6


Scots toss the caber. Spaniards get chased by bulls through the streets of Pamplona. Finns bathe in frigid water. And British Columbians go birling. But if you ask people what log birling is, according to Heather Kellerhals-Stewart, most people won't be able to tell you, even though many of us have tried it. "What Canadian kid who is lucky enough to be near water in the summer,"; she asks, "hasn't hopped atop a makeshift birling log and shortly thereafter got dunked?";

The art of balancing on a spinning, floating log-and dunking your opponent into the saltchuck-is alive and well in Kellerhals-Stewart's eleventh children's book, Skookum Sal, Birling Gal (Harbour $18.95), illustrated by Janice Blaine. In a sequel to Skookum Sam, Spartree Man, Sam's sister Sal wants to birl like her father, grandfather and great-grandfather before her.
"You need more muscle power, Sal,"; says her father. "When did you last see a lady log birler?"; So Sal springs into action, cutting and stacking a huge pile of firewood. Impressed, her father takes her to the 'frog-slime' covered log that her brother Sam once learned on. Undeterred by the initial 'SPLAT!' of hitting the water, she practices and practices. Ultimately she competes against 'a bear of a man, with size 13 boots' on Logging Sports Day.

"Skookum Sal is modeled after any kid who doesn't quite fit into the norm,"; says Kellerhals-Stewart, who previously penned She Shoots, She Scores. "It's not about women versus men, or girls versus boys. It's about the so-called misfit who wants to do something different and with a passion, whether it is the boy in grade 6 who wants to be a ballet dancer or the girl like 'Sal' who wants to be a log birler.";

Due to dry-land log sorting, log birling survives today mainly as a sport. "There are always diehards who, given half an excuse, will hop atop a floating log,"; says Kellerhals-Stewart, who lives on Quadra Island where her family has a Woodlot Licence. "Love logging or hate logging, it's what has kept these big-hearted, little towns of Woss, Tahsis, Port Alice, Sayward and Campbell River going."; 1-55017-285-9