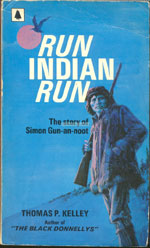 
Thomas Kelley wrote the first book about British Columbia's most remarkable outlaw, Simon Gun-an-noot, charged with the murder of two men near Hazelton in 1906. Simon Gun-an-noot was a relatively successful Gitksan trapper and storekeeper who eluded capture in the Kispiox for thirteen years until he was acquitted in 1920. His brother-in-law Peter Hi-madan was also accused and fled into the woods. Along with some family members, including Gun-an-noot's father Na-Gun, the fugitives survived in the bush with the complicity and assistance of Gitksan in the area. Several expeditions pursued the outlaws, but Gun-an-noot's superior knowledge of the wilderness around the headwaters of the Skeena, Nass and Stikine Rivers, and his abitilities to survive its rigours year-round, soon made him into a symbol of Gitksan independence in an area where Indians had never made a treaty. Gun-an-noot often followed his pursuers and could have easily ambushed some of them, but never did, hence he acquired folk hero status. Gun-an-noot surrendered to Mounted Police in Hazelton on June 24, 1919 in the company of Vancouver lawyer Stuart Henderson who had taken an interest in Gun-an-noot's plight. With Henderson's representation in a Vancouver courtroom, Gun-an-noot was exonnerated. Hi-madan followed suit and was also acquitted. Evidence against both men was scant, and some prosecution witnesses had disappeared or died, so the Crown prosecutor did not rigourously pursue the case. Simon Gun-an-noot was born around 1874 in Gitanmaax and died of heart failure in October of 1933 while tending his trapline near Stewart. He was buried in the wilderness. [See also David Ricardo Williams entry]