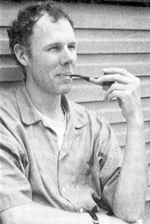 
Born in Sale, England on May 6, 1953, Michael Kenyon has lived on the West Coast, mainly Pender Island, since his arrival in Canada in 1967. To support himself he drove a taxicab part-time from 1976-2002. He studied with members of the Creative Writing Department at the University of Victoria in the late Seventies. He has also attended the Banff Centre Dramatic Writing for Film, TV, and Theatre Workshop in November/December 1992, the Banff May Writing Studio May/June 1993, the Banff Fall Writing Studio October/November 1996, and the Banff Radio Drama Workshop, April 1998. He has published book reviews for The Malahat Review and has written a column for Monday Magazine (Victoria) based on cab driving experiences. He has facilitated fiction workshops at the Victoria School of Writing, UVic, and on Pender Island. In 1999 he collaborated with visual artists and an architect to conceptualize a permanent public art installation on Broad Street in Victoria as part of that street's revitalization. He was on the editorial board of The Malahat Review from 1985-2003. Michael Kenyon has a therapy practice in process-oriented psychology and jin shin do bodymind acupressure. His novel Kleinberg (Oolichan), about diverse characters in an apparently conventional community, was shortlisted for the W.H. Smith/Books In Canada First Novel Award for 1991. Astatine (Brick Books 2014) is Kenyon's fourth book of poetry. Astatine is the name of an Italian girl who, like Dante's Beatrice, haunts the narrator.

Articles: 2 Articles for this author
The Biggest Animals
Press Release (2006)


Rosa Pryznyk's harrowing escape from the Great War to America left her knowing that she was ordained for an extraordinary life. She didn't, though, see the aching beauty of it, nor did she see the wretchedness or hardship that would continually dog her fate. But Sam Gentles saw all of Rosa's life completely because he invented her for his novel. And Herb Thedal, the film director of Sam's script, also saw Rosa precisely and with purpose. But can they shape their own chaotic lives with such resolution and comparable acts of faith? Though ambitious in its structure, and unconventional in its plot, Michael Kenyon's novel is rewarding, resourceful story telling.


Part intellectual mystery and part spiritual adventure, A Year At River Mountain tells the story of an aging actor from Vancouver who has immersed himself in monastic life in China and is now examining his past as an actor, husband, and father. As his Western consciousness grapples with Taoist philosophies and acupressure techniques, he assesses his life and records the struggles of transformation that accompany such thinking.

The monastery's Old Master has given the narrator permission to write the commentary he shares with us while raising the question of who "reader and narrator"; really are. At times uncertainty leads him to confuse the monastery with another kind of institution. Fellow monks, particularly the American bellringer, Frank, are often as humorously baffling as they are ritualistically inviting. But the force driving his obsessive commentary and his year at River Mountain is the anticipation of the arrival of Imogen, an American actor and monastery patron.
Kenyon balances the narrator's interior life with hints of external disturbance and with purposeful missions outside the monastery. Village unrest threatens the monks' balance and harmony; the nightmarish rape of a village woman uncovers a trapdoor to chaos; travel over the mountain conjures a snow leopard in a blizzard-choked pass; an arduous journey to wild islands off the coast offers ancient discoveries; and a trip to the city to find a prophet changes time forever. Crises build as war threatens; floods occur and a devastating event leads our narrator to a beautiful and surprising formulation of how things are.