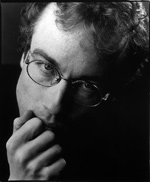 
Born in Vancouver, Sept. 28, 1968 (but raised in Kamloops), Kevin Kerr received the 2002 Governor General's Award as a playwright for his play called Unity (1918). Published by Talonbooks ($12.95), it concerns the Saskatchewan town of Unity and the world-ravaging flu of 1918. Mail is burned. Nobody can enter. Or leave. The town is quarantined. Kerr revisits the creeping hysteria caused by an epidemic called The Spanish Flu, a scourge that killed more people than the battles of World War One combined. In the play, the citizens of Unity inevitably begin to turn on one another in fear, like men trapped in a submarine. A scapegoat for their predicament must be found. "I read that this flu, uh might be the Germans,"; says one resident. The play was first produced with input from dramaturge Elizabeth Dancoes. As playwright-in-residence at Touchstone Theatre in Vancouver during their 1999/2000 season, Kerr developed Unity (1918), which Touchstone premiered in Vancouver in 2001. 0-88922-461-7

Kerr is a founding member and co-artistic Director of the Electric Company Theatre in Vancouver, a collective with whom he's co-written several plays including Brilliant!, The Wake, and The Score. First performed in Vancouver in 1996, Kevin Kerr's co-written play about the 20th century genius Nikola Tesla was published as Brilliant! The Blinding Enlightenment of Nikola Tesla (Calgary: Brindle & Glass, 2004). Tesla's alternating current induction motor has been cited as one of the ten greatest discoveries ever. He also pioneered the fluorescent light, the laser beam, wireless communication, remote control, robots and vertical take-off aircraft. Kerr and the Electric Company have earned numerous Jessie Richardson Theatre Awards since the group was co-founded in 1996 to produce a 45-minute version of Brilliant! as an entry in the Vancouver Fringe Festival. It became the inaugural production of the Electric Company Theatre, collectively credited to Studio 58 students Kevin Kerr, Kim Collier, David Hudgins and Jonathon Young. The play was 'revisited' five times between 1996 and 2003.

Kevin Kerr's Studies in Motion (Talonbooks 2008 $18.95) examines the obsession of the Victorian photographer Eadweard Muybridge to stop time and freeze motion, partly to alleviate the painfulness of an overly dramatic life that featured adultery, jealousy, betrayal, murder and an abandoned child. Kerr reveals how the pioneering cameraman used technology to try and absolve his guilt due to tragic actions from his past, including his acquittal for killing his wife's lover as justifiable homicide. 978-0-88922-592-3


Skydive explores the world of dreams and imagination: the universal human desire to push beyond our physical limitations and to fly.

Having grown apart after a traumatic and defining moment in their youth, two brothers reconnect to fulfill a life-long ambition to go skydiving. Morgan (a feckless schemer who has recently reinvented himself as a counsellor) arrives on the doorstep of Daniel (a housebound agoraphobe), offering to help "liberate"; his brother by administering his newly invented technique of "Paratherapy."; Convincing Daniel to face his fears by pursuing their long abandoned childhood dream of jumping from an airplane, the brothers begin a series of misguided training exercises to prepare for their adventure.

Yet we realize that something is being subverted as we watch the comedy rooted in a lighthearted nostalgia for their youth in the 1980s give way to a high-stakes adventure in a surreal environment of lucid dreams and startling visions occurring in the final seconds of a freefall adventure gone horribly wrong.

Commissioned by Realwheels, a Vancouver-based theatre company that aims to increase audiences' understanding of the disability experience, Skydive was created to be performed by one able-bodied and one differently-abled actor. Using the technology of Sven Johansson's ES Dance Instruments (a seventeen-foot, counterweighted lever that allows a performer to fly in all directions as well as cartwheel and somersault through space), the show is written to be staged almost entirely in the air, intricately choreographed and performed in a tightly orchestrated dance between the actors and the four operators who control the instruments. These instruments, both liberating and restrictive, equalize the bodies of the performers allowing not only for images of flight and freefall, but also for the physical metaphor of the power of dreams, imagination and human connection that lifts us above our individual physicalities.