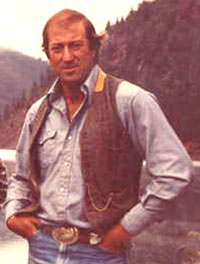 
Born in Malta on December 27, 1945, self-publisher Chris Kind came to B.C. in 1950 and has been a cowboy and a Big Game Guide Outfitter in British Columbia for most of his life. She's Downhill and in the Shade is his autobiography that includes the Gang Ranch in B.C., rodeos in B.C. and Alberta, and the cowboys of Pendleton, Oregon. Kind's often humourous story moves north to the Muskwa and Spatzizi Rivers and into Big Game hunting. Bighorns and Stone sheep is dedicated to Gary Powell, an Outfitter from Hudson's Hope, and includes more than 150 ram photos "including the World record and no 2 California Bighorn in the world." It covers forty years of guiding sheep hunters "from the Great Snow Mountains of the Gang Ranch and Mighty Fraser River to Spatzizi, Muskwa, Stikinne and Cathro Rivers of Northern British Columbia." His other book spans 150 years of history of the Gang Ranch and recalls the major relocation and transplant of California Bighorn Sheep from the Gang Ranch to several States in the USA.

Kind has fashioned a tribute to the horse's contribution to the development of British Columbia and its role in military campaigns with his sixth self-published title, Buckaroos and Broncs ($25 plus shipping.) "The book is basically a tribute to the horse in general,"; says Kind. "It moves through freighting, pack horse, transportation (BX.Stage lines) and road building, as well as the purchase of thousands of horses by the British from Canada/USA to fight their battles in the 1800s and early 1900s. I have also included the actual schooling of the horse and methods needed to make a well disciplined, finished horse."; Paintings of battles are featured, and early B.C. photos from the Clinton Historical society.