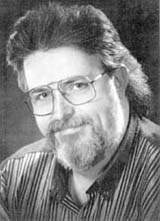 Born in Toronto on October 12, 1953, Gordon Kirkland of Pitt Meadows arrived in B.C. in 1982. He is a humourist and public speakers whose column "At Large" has appeared in Canadian and American newspapers since 1994. He is the author of Justice is Blind - And Her Dog Just Peed in My Cornflakes (Harbour, 1999), Never Stand Behind a Loaded Horse (Saskatoon: Thistledown, 2004) and a print-on-demand title When My Mind Wanders It Brings Back Souvenirs (2005), distributed in Canada by (now defunct) Hushion House.

Kirkland is a member of the Pacific Northwest Writers Association and the BC Paraplegic Association. He has said he lives with his wife Diane, two teenage sons, two cats "and the dumbest dog to ever get lost on a single flight of stairs." In 1990 his car was rear-ended on his way to the golf course, leaving him partially paralyzed and dependent on crutches or a wheelchair for mobility. In recent years he has been helped by his assistance dog, Tara, who picks up anything he drops, gets items from lower shelves in stores and can even open doorknobs and push elevator buttons. Since suffering his spinal injury he has used humour as therapy.

According to his website, the first newspaper to pick up his column in 1996 for syndication was the Saskatoon Star-Phoenix in Saskatoon. "Saskatoon and the readers there hold a special place in my heart," he said. "I'm really quite happy that the new book will originate in a city that has laughed along with me for so many years." Kirkland has also recorded a live comedy CD, Gordon Kirkland At Home On The Road, released in 2004, the same year he became the first Canadian humorist to be added to the faculty of the Erma Bombeck Writers' Workshop at the University of Dayton in Ohio. He states his touring schedule takes him to approximately 40 cities in Canada and the U.S. each year with roughly one hundred days out of each year spent on the road in appearances and book promotion events. I Think I May Be Having One Of Those Decades (AuthorHouse, 2006), Gordon Kirkland's fourth collection of short humour, was launched in the United States in March of 2006, in conjunction with his appearance as a speaker at the Erma Bombeck Writer's Workshop at the University of Dayton.

Justice is Blind - And Her Dog Just Peed in My Cornflakes (Harbour, 1999)
Never Stand Behind a Loaded Horse (Saskatoon: Thistledown, 2004)
When My Mind Wanders It Brings Back Souvenirs (2005), distributed in Canada by Hushion House.
I Think I May Be Having One Of Those Decades (AuthorHouse, 2006)
I May Be Big But I Didn't Cause That Solar Eclipse (2007)

Articles: 1 Article for this author
Justice is Blind, and Her Dog Just Peed in my Cornflakes (Harbour $17.95)
Article


"My life in the '90s has been a roller-coaster ride,"; says Gordon Kirkland. "In August 1990 I sustained a severe spinal injury in a golfing accident.
"No, I didn't play full-contact golf. While I was on my way to a course, my car was rear-ended by a man looking for a cassette tape on the floor of his car. It really screwed up my handicap.";
Kirkland spent two years in various forms of therapy and frustration. Just after the second anniversary of the accident, in August 1992, when he started to make his first attempts at 'walking' again, a severely hung-over driver rear-ended his car and eliminated what few gains he had made. He was hospitalized again.
"Two years later, in May 1994, I started to believe that even-numbered years in the Nineties were out to get me. I was rear-ended again, this time by a member of the Royal Canadian Mounted Police. It was the fastest I had ever seen the police on the scene of an accident. The officer told me it was the fastest he had ever arrived on the scene of an accident.";
Using laughter as a means to cope with a slow and painful recovery, he has published Justice is Blind, and Her Dog Just Peed in my Cornflakes (Harbour $17.95) after a therapist encouraged him to develop his comic viewpoint.
A member of the B.C. paraplegic association, Kirkland now writes his syndicated weekly column, At Large, from his home in Pitt Meadows.His quips run the gamut from video arcades to vasectomies, wheelchairs to weight control, mega stores to marriage. 1-55017-198-4