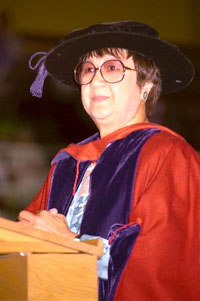 
"Education has been my whole life." -- Verna Kirkness

Born in 1935 on the Fisher River Reserve in Manitoba, Verna Kirkness of the Cree Nation became the founding director of the First Nations House of Learning at the University of British Columbia in 1987. She spearheaded the creation of the First Nations Longhouse, a 2,000 square-meter educational facility that serves as a "home away from home"; for Aboriginal students. This magnificent building made of West Coast cedar and copper roofing imported from France officially opened on May 25, 1993.

Kirkness began her teaching career at the age of 18 and held positions as principal, education counsellor, Supervisor of Schools, curriculum consultant and education director for the Manitoba Indian Brotherhood (Assembly of Manitoba Chiefs) and the National Indian Brotherhood (Assembly of First Nations) before she came to British Columbia to work as the Supervisor of the Native Teacher Education Program and Director of Indian Education at UBC.

Kirkness co-authored Khot-La Cha: An Autobiography of Chief Simon Baker (1994), with Simon Baker, as well as The First Nations Longhouse, Our Home Away from Home (2001), with Jo-ann Archibald. She self-published Aboriginal Languages: A Collection of Talks and Papers (1998) and co-edited a resource book with D. Bruce Sealey entitled Indians Without Tipis (1973). Her other titles are Indians of the Plains (1984) and First Nations and Schools (1992).

For her work as an administrator, educator and author, Kirkness received the Order of Canada, as well as honorary degrees from Mount St. Vincent University, University of Western Ontario and the University of British Columbia. She retired to live in Winnipeg.

Review of the author's work by BC Studies:
Creating Space: My Life and Work in Indigenous Education

Creating Space: My Life and Work in Indigenous Education (2013)