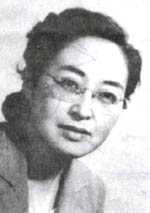 
Tsukiye Muriel Kitagawa was born in Vancouver on April 3, 1912. Raised mainly in New Westminster, she graduated from Duke of Connaught High School and briefly attended UBC. Befriending other Nissei who were anxious to be full-fledged Canadian citizens with the right to vote and work in any profession, she helped found The New Age in 1932, the first journal to regularly print the thoughts, emotions and ideals of Canadian-born Japanese Canadians. By 1941 she had married the star of the local Asahi baseball team, Ed Kitagawa and was writing regularly in the English language periodical New Canadian. Edited by Roy Miki, her posthumous collection called This Is My Own: Letters to Wes & Other Writings on Japanese Canadians 1941-1948 (Talonbooks, 1985) consists primarily of letters Kitagawa sent to her brother Wes Fujiwara, a medical student in Toronto, in the aftermath of the Pearl Harbour bombing of December, 1941. She describes the forced incarceration at Hastings Park of Japanese Canadians, the signs on the roads saying JAPS KEEP OUT, the humiliation of curfews and the horror of being forced to sell possessions. Miki contributed a comprehensive introduction to place Kitagawa's writing in historical context. Of the 21,000 individuals of Japanese descent who were uprooted and dispossessed on the West Coast, some 17,000 were naturalized or Canadian-born citizens. Muriel Kitagawa died in 1974. (Also see Roy Miki, Joy Kogawa.]


Review of the author's work by BC Studies:
This Is My Own: Letters to Wes & Other Writings on Japanese Canadians, 1941-48