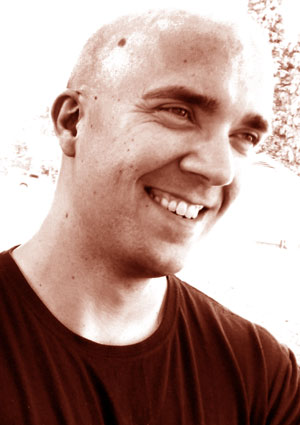 
Ryan Knighton was born on September 19, 1972, in Langley, British Columbia. On his eighteenth birthday, he was diagnosed with retinitis pigmentosa (RP), a congenital disease marked by a progressive pathology of night-blindness, tunnel vision and eventually total blindness. In the final stage before total blindness, with only 1% of his visual field, he published Cockeyed (Penguin 2006), a memoir about his thoughts and experiences pertaining to his loss of sight. "This is what it's like to grow up, screw up your job, crash Dad's car, pick up the wrong chick at a punk bar, and strain your love life to the limit. But this time, there's a good excuse: you can't see. No seriously, dude: you're blind," recommended Don McKellar. In 2006, Knighton was teaching at Capilano College and living in East Vancouver with his seeing-eye pug, Cairo. In 2008 he was invited to the Sundance Screenwriters Lab in Utah to write a script based on Cockeyed.

In 2010 Knighton released his memoir of being a father during the first year of his child's life in C'mon Papa: Dispatches from a Dad in the Dark (Knopf $29.95). Love is blind anyway...