Vancouver Island resident Catherine Knutsson divides her time between teaching, singing and writing. Like the narrator of her first novel, Shadows Cast by Stars (Atheneum, 2012), Knutsson is a member of the Métis nation. She incorporated the traditions of the First Peoples, as well as the more familiar stories of Greek mythology and Arthurian legend, into the crafting of her dystopian novel. The plot summation of her novel from 2012 is significant in terms of its similarity to another dystopian, futuristic story for young adults by another Métis author, Cherie Dimaline, which became hugely successful after it was published five years later.

"Two hundred years from now, blood has become the most valuable commodity on the planet—especially the blood of aboriginal peoples, for it contains antibodies that protect them from the Plague ravaging the rest of the world. Sixteen-year-old Cassandra Mercredi might be immune to the Plague, but that doesn’t mean she’s safe—government forces are searching for those of aboriginal heritage to harvest their blood. When a search threatens Cassandra and her family, they flee to the Island: a mysterious and idyllic territory protected by the Band, a group of guerilla warriors—and by an enigmatic energy barrier that keeps outsiders out and the spirit world in. And though the village healer has taken her under her wing, and the tribal leader’s son into his heart, the creatures of the spirit world are angry, and they have chosen Cassandra to be their voice and instrument..."

Shadows Cast by Stars was shortlisted for the Burt Award for First Nations, Metis, and Inuit Literature and the Monica Hughes Award for Science Fiction and Fantasy in 2013. She has been one of seven members of River Writers, an all-female group of co-supportive fiction writers who were meeting to discuss their projects in Campbell River on Vancouver Island. 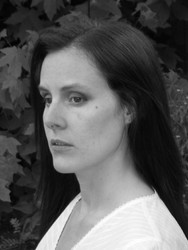