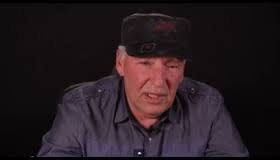 
Born in Budapest in 1947, Tom Konyves escaped Hungary in 1956 and settled in Montreal where he published a Dadaist magazine and operated his own small press, Asylum Publishing, which published two of his own books of poetry. He left Montreal in 1983, having been one of the original seven poets dubbed The Vehicule Poets, a group influenced by avant-garde literature movements. His memoir Vehicule Days (Nuage Editions, 1993) outlines his involvement with experimental poets in Montreal.

In Vancouver, he initiated 'The Great Canadian Poetry Machine' at Expo 86 and co-edited Bite poetry magazine. In 1978, he coined the term "videopoetry" to describe his multimedia work. His poetry collections include Love Poems (Asylum Publishing), No Parking (Vehicule Press, 1978); Poetry in Performance (The Muses Company, 1982); Ex Perimeter (Caitlin Press, 1988) and Sleepwalking Among the Camels (The Muses Company, 1995).

Accompanied by Randy Raine-Reusch on didjeridu, Konyves performed 23-Skidoo: 23 Poems for Didjeridu (or HAI-didjeri-KU) in 2005 in Vancouver. His surrealist novella OOSOOM (Out Of Sight Out Of Mind) was published by Bookthug Books (2007). Since 2006, Konyes has been teaching screenwriting, video production, journalism and creative visual writing courses at the University of the Fraser Valley in Abbotsford, BC.

Described by poet Lionel Kearns as "a film-maker by day, a poet by night," Tom Konyves released his poetry collection Perfect Answers to Silent Questions (Ekstasis, 2015) to include dadaism and surrealism, found poems, photo poems, haiku and language poetry. 978-1-77171-107-4 $23.95