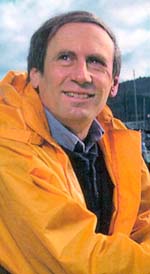 
Tom Koppel wrote Kanaka (1995), the first book about the Hawaiian pioneers of British Columbia. They were mainly brought to the West Coast of North America, from Oregon to Alaska, by the Hudson's Bay Company's recruiting office in Honolulu.

Based largely on recent research by Canadian scientists, particularly in the field of underwater archaeology, Koppel's Lost World (2003) argues that the first migrants into the Americas were maritime people who came from Asia by sea, around the North Pacific Rim, not as hunters by land via the Bering Strait land bridge. It was featured on CBC's Quirks and Quarks, was a finalist for Victoria's Butler Book Prize, and won cash awards from both the Canadian Archaeological Association and the Canadian Science Writers Association.

Koppel also wrote the first book about the Ballard fuel cell and its development in North Vancouver, Powering the Future (1999). It was named one of the ten best business books of 1999 by Amazon.com. and it made him a finalist for Canada's National Business Book Award for 2000. It was published in Japanese and German translations in 2001.

Ebb and Flow (2007) examines the history and science of tides, with particular emphasis on Canadian and British Columbian tides. According to the book jacket, Koppel, explores how tides impact coasts and marine life, how they have altered human history and development, and how science has striven to understand the surprisingly complex way in which tides actually work. "Tides shape our world. They have sculpted shorelines, transformed early life on Earth, and changed the course of civilization. Tides frustrated Alexander the Great and Julius Caesar, and aided General MacArthur. They govern the way our planet moves, provide us with an alternative source of energy, and may be aggravating global climate change."

Based on many years of travel and research, Tom Koppel's fifth popular book of history and science, Mystery Islands: Discovering the Ancient Pacific (University of the South Pacific Press $40 2012) describes an epic journey that spans millennia and enormous distances on the world's largest ocean. Koppel ponders how ancient voyagers spread culture and language, agriculture and architecture, religion and rituals across Melanesia, Micronesia and Polynesia. It includes his account of kayaking through the ruins of a royal city built on an archipelago of islets off Pohnpei more than 1,000 years ago, as well as surprising information about familiar travel destinations such as Hawaii, New Zealand and the Galapagos Islands. The 376-page book includes 16 pages of high quality color photos from years of research trips, exploration and adventures among the Pacific islands, as well as two maps, a bibliography and index. Contact koppel@saltspring.com.

Among his many achievements, Koppel claims to be the first Canadian journalist to work in Russian, with salary, office and travel privileges, at a major Soviet newspaper, for Rabochaya Gazeta, in Kiev (Ukraine), during the winter of 1989/90. Koppel has a B.A. (economics) from the University of Pennsylvania, 1966, and a Ph.D. (political science) from the University of Wisconsin, 1972 (Russian and German studies). He received a Canadian Archaeological Association Public Communications Award in 1996 for his Canadian Geographic feature, "The Spirit of Haida Gwaii." In 2001 he received that same award again, along with an award from the Canadian Science Writers' Association, for his five-part feature series, "The Lost World," in the Vancouver Sun.

Review of author's work by BC Studies:
Kanaka: The Untold Story of Hawaiian Pioneers in British Columbia and the Pacific Northwest
Mystery Islands: Discovering the Ancient Pacific

Ebb and Flow: Tides and Life on Our Once and Future Planet (Dundurn, 2007).

Powering the Future: The Ballard Fuel Cell and the Race to Change the World (John Wiley & Sons, 1999).

Kanaka: The Untold Story of Hawaiian Pioneers in British Columbia and the Pacific Northwest (Whitecap Books, 1995)

Articles: 3 Articles for this author
The Ballard Fuel Cell and the Race to Change the World
Info


Saltspring Islander Tom Koppel was nominated for the National Business Book Award for The Ballard Fuel Cell and the Race to Change the World.


Based largely on recent research by Canadian scientists on the B.C. coast, particularly in the field of underwater archaeology, Tom Koppel's Lost World: Rewriting Prehistory-How New Science Is Tracing America's Ice Age Mariners (Atria $41) argues that the first migrants into the Americas were maritime people who came from Asia by sea, around the North Pacific Rim, not as hunters by land via the Bering Strait land bridge. 0-7434-5357-3


The first Hawaiian to reach British Columbia was Winée, the personal servant of 18-year-old Frances Barkley, usually credited as the first European woman to see the West Coast of Canada. Winée and Frances Barkley arrived at Nootka Sound in 1787 on the Imperial Eagle under the command of Captain Charles Barkley. Winée was the forerunner of hundreds of Sandwich Islanders who were dubbed Kanakas upon their arrival in the gold fields of B.C.

Hawaiian workers also settled at Kanaka Creek, behind Fort Langley. Newcastle Island off Nanaimo has a Kanaka Bay. The Empress Hotel in Victoria is situated on the ruins of a shantytown that was called Kanaka Row. A few Hawaiian families lived at the "Kanaka Ranch"; at the foot of Denman Street in Vancouver, site of the Bayshore Inn. Sawmill workers in North Vancouver lived at Moodyville's Kanaka Row, the second-largest Hawaiian settlement in B.C. after Salt Spring Island. Ganges on Salt Spring has a Kanaka Road.

In 1995, Salt Spring Islander Tom Koppel published Kanaka: The Untold Story of Hawaiian Pioneers in British Columbia and the Pacific Northwest (Whitecap). B.C.'s most active historian, Jean Barman, has now prepared a family portrait of the half-Hawaiian matron Maria Mahoi, born outside of Victoria, around 1857, probably in Esquimalt. She had an Hawaiian father and an unknown mother who is thought to have died in childbirth.

Maria (pronounced Mariah) had 13 children by various 'newcomer men' while living mainly on Salt Spring and nearby Russell Island (off Fulford Harbour). She died in the late 1930s. Mahoi's turn-of-the-century home is a pivot point for a new Gulf Islands National Park. Parks Canada sponsored a reunion of her descendants last August. Barman talked to Mahoi's kin and produced a manuscript for New Star Books that will soon appear within its Transmontanus series, edited by Terry Glavin.