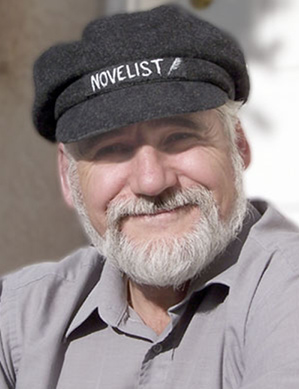 
David Korinetz was born in Winnipeg, and grew up on a diet of comic books, Edgar Rice Burrows novels, and the Hobbit and Lord Of The Rings. He writes fantasy novels from Naramata, B.C. where he doubles as the owner and operator of Red Tuque Books, a distribution and marketing service for independent authors such as himself.

FireDrakes: Chronicles Of The Daemon Knights tells the tale of the task of freeing a race of Firedrakes from the grip of an evil sorceress by a young untried Daemon Knight. The job seems simple enough; just retrieve a magical amulet she is using to hold them in thrall, but most of the FireDrakes don't want his help, and he has fallen in love with the beautiful sorceress. Shortly after FireDrakes was published, David received an Honorable Mention for a short story he submitted to the Writers of The Future contest.

In 2009, Korinetz published his second book in the Chronicles of the Daemon Knights series, Sorceress:

"Stripped of her power, with deadly foes at every turn, Magdalen sets out for the safe haven of Toth. An unwilling witness to the murder of a FireDrake along the way, she is captured by a marauding band of Imperial Dog soldiers. Their ruthless leader, Kaspar, is a crazed fanatic who will stop at nothing to see that she faces Emperor Gamel's harsh justice."

"With Emperor Gamel gone, Coronus remains at peace for nearly a year, until the day of Lady Agnes and Sir Gregory's wedding feast, when an attempt is made on Prince Erik's life right under the noses of the Daemon Knights. At the same time, Magdalen learns that Crystal City is under siege. As their new Empress, she feels duty-bound to undertake the long journey back through the Olaug in order to deal with it. The problem, at least as far as her husband Rodney is concerned, is that she is three moons pregnant.

"Wizard Aldus has a problem of his own. In order to undo the spell Gamel cast upon him, which still continues to prevent him from using his gift, he needs to find a Silver Elf. After a year of fruitless searching he has recently discovered where one might be found. He must sail far to the south, beyond the Southern Islands, to a continent that no living person in all of Coronus has ever been to, and that may not even exist. In the midst of all this, something dark is stirring in Carpathia, and Sir Hugh, the two hundred year old former Daemon Knight, is determined to discover what it is. What no one suspects is that an old foe is not quite as dead as they thought, and that these events are all connected."

Warlock is actually the first book in Korinetz's second, related trilogy. "I provide enough backstory so it is not necessary to read the first trilogy," he says. "After reading Warlock, some may wish to go back and read the first trilogy My books are character-driven and many of my readers enjoy them even though they are not normally fans of the Fantasy genre." In 2015, Korinetz visited a number of schools in the South Okanagan to talk with students about writing through the South Okanagan Raise-A-Reader program and he served as one of five instructors at the 2015 BC Youth Writers Camp.

Articles: 1 Article for this author
Warlock: Chronicles of the Daemon Knights
Article (2016)

With fifteen different points of view in forty-five short chapters, it's nearly impossible to render a viable synopsis of David Korinetz's fourth fantasy novel, Warlock: Chronicles of the Daemon Knights with its serpentine plot and non-stop action.

Ships are wrecked in storms, evil sea captains are plotting murder, assassins with incredible powers are lurking everywhere, armies are about to invade. There's danger around every sand dune, tree and corner.

David Korinetz says he decided on this multiple-storyline approach after reading Game of Thrones.
"I like to keep the story moving,"; Korinetz says, "and that's why I try to keep chapters to ten pages or less. Terry Brooks also heavily influenced me. He tends to use multiple story arcs. I like to get into the head of each character to show how they see things a little differently than everyone else.";

Halflings are small human-like characters who use their fetches to travel at will. A fetch is an apparition of a living person. A wraith, according to The ElfKing, is a bodiless soul that for some reason has chosen to remain in the world of the living.

A warlock, on the other hand, is a sorcerer, a necromancer and a practitioner of the dark arts. "They were vile abominations,"; explains the ElfKing, "neither dead nor truly alive, but always extremely dangerous.";

Emperor Gamel is one such vile abomination. He hasn't let being dead stop him from conjuring up evil. He was close to obtaining the four elfin amulets that would have granted him unlimited power and eternal life. Except that the Daemon Knight, Sir Rodney Vincent thwarted the warlock by getting the beautiful Empress, Magdalen, who is now pregnant with his child.

If the warlock can only move into her baby's body when he or she is born, then he will have it all. While Gamel conspires to get his hands on Magdalen, having pulled himself out of the dark void and into the body of the Carpathian King, Brian, who is quite a schemer himself.

Will the wizard Aldus ever find a rare Blue Elf to help him break the spell that Gamel cast on him, the spell that has rendered the benevolent old wizard magicless? Can his apprentice, Robin, ever learn as much as his master?

Will Shaun, the big Icarian shape shifter turned into a were-beast by the swamp witch, survive his capture by the Herrenvolk and his subsequent wounds while fighting as a gladiator?
Why does the Princess hate Jack so much? Once an assassin but now an ambassador, can Jack be trusted? Will the Balorian halfling, Hugh, and the Blue ElfKing be able to help stop the warlock?

Warlock seems to be set in medieval times, equivalent to 10th century Europe, but according to the author, the time "could be in the distant past or in a distant apocalyptic future.";
Clearly Korinetz is an incredibly imaginative writer, but how does he keep track of it all? His first novel was rewritten five times; the second and third, twice. This one was written in one go, but he says he spent more time fleshing out the outline-nearly two years.

"I typically do a 10,000 word outline,"; he told me. "I spend three to four months working on one for each book so I can get the plot worked out. Once that is done, I focus on individual chapters and the characters who own them. I have a character book where I keep notes about the basics and update the character when things change.";

Korinetz' first three books, FireDrakes (2007), Sorceress (2009), and Halfling (2011), formed The FireDrakes Trilogy, while Warlock continues the Chronicles of the Daemon Knights as the first book in what will be The Warlock Trilogy.

The next book in The Warlock Trilogy, Prophet, is ready and that's a good thing; few readers will be happy about the way Warlock ends suddenly unless they have the next book on their radar.

"Leaving multiple threads of a story open has more or less become a standard practice in the fantasy genre,"; says Korinetz, "and I know this from the hundreds and hundreds of books in this style I have read over the years.

When Korinetz wrote his first book, FireDrakes, he did not know that he would end up with a trilogy. With Warlock, he did. "I know how it will all end,"; he says, "but I am still working on the details of how to get there. I expect to have the next book out by the end of 2017 and the third in 2019.";

In addition to the map he provides at the front of the book, I'd like to see Korinetz include a character page with a short description of each because I found myself doing far too much backtracking. Even readers who have read the last series are going to need some reminding when the next trilogy comes out. If you're an impatient reader like me, it could be better to wait until all three books in this new series are finished. For that matter, starting with the FireDrakes Trilogy would make sense, too, although Korinetz insists that's not necessary. 978-0-9783824-3-8