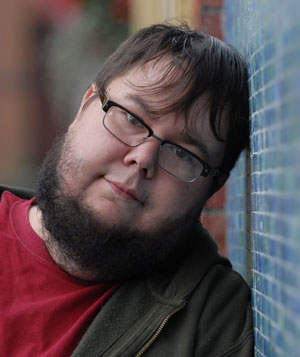 
Vancouver spoken word virtuoso Shane Koyczan is the undisputed local hero of the Vancouver poetry scene, easily eclipsing the old guard in international exposure and popularity. Born in Yellowknife, he attended the Creative Writing Program at Okanagan University College and became the first poet from outside of the U.S. to win the U.S. National slam poetry competition in 2000.

Shane Koyczan became known around the world on February 12, 2010, when he performed segments of his previously recorded poetic dissertation on the nature of Canada, 'We Are More', towards the end of the lavish and inventive opening ceremonies for the 2010 Olympics at BC Place Stadium. The event also included Donald Sutherland's voice reading brief segments of writing by Alberta novelist W.O. Mitchell's Who Has Seen The Wind? as well excerpts of verse from Pauline Johnson [see separate entry] and some phrases reputedly written by Chief Dan George [see separate entry]; plus renditions of Leonard Cohen's Hallelujah-as sung by K.D. Laing-and Joni Mitchell's Clouds, two of the most successful, 'literary' pop songs Canada has ever produced.

Winner of a CBC National Poetry Face Off, Koyczan has performed with such notables as Maya Angelou, Quincy Troupe and Utah Phillips, and has been an opening act for Ani DiFranco, Spearhead and Saul Williams. He has performed at the Edinburgh Book Festival, the Vancouver International Writers Festival, the Winnipeg Folk Festival and the 2007 Canada Day Celebrations in Ottawa. Koyczan has now won both the US Slam Poetry Championship and the Canadian Spoken Word Olympics. He has consistently placed near the top of the competitions in other years in which he competed.

His first poetry collection, Visiting Hours (Vancouver: Mother Press Media, 2005), was launched at the Anza Club on November 10, 2005. It was included by both The Guardian and the Globe & Mail in their Book of the Year lists, the only poetry title to appear in both, and later represented by House of Parlance Publishing. By 2014 it was into its third edition. It includes 'We Are More'.

Shane Koyczan's anti-bullying dissertation 'To This Day Project' video reportedly went viral in early 2013, with over 13 million views and counting. Annick Press has published a book-length version in 2014 with illustrations by thirty international artists.

The poetry collection Our Deathbeds Will Be Thirsty (2012) also features To This Day. Since its video release, Shane has presented at TED Talks, where the audience leapt to their feet in applause. Sir Ken Robinson has listed that talk as one of his top ten talks on education. It led to Koyczan's collaboration with TED Education to create a classroom tool that provides teachers a way to discuss anti-bullying with students.

Koyczan's 'talk rock' band Short Story Long is a quartet that plays folk, funk, rock and ambient music. It received a "Best New Artist"; award at the BC Interior Music Awards in 2009, as well as Best Spoken Word Album and Best Spoken Word Piece in 2012 for CDBaby's Just Plain Folk Awards. His video 'Instructions for a Bad Day' was shown at the 2012 Vancouver International Film Festival.

Stickboy, his novel in verse, portrays the lonely struggles of a bullied child, full of rage, and the ultimate healing power of love. It is based on his own childhood experiences and has been used for the basis of a contemporary opera, Stickboy, to be staged at the Vancouver Playhouse, October 23 to November 7th, 2014, music composed by Neil Weisensel, libretto by Shane Koyczan. [The Vancouver Writers Festival will present an evening with Koyczan, in discussion with James Wright, the General Director of Vancouver Opera, at Frederic Wood Theatre, UBC, on Tuesday, October 7 at 7:30 pm. The evening will also feature Conductor Leslie Dala and libretto dramaturge and Director Rachel Peake. The evening called Stickboy: From Page to Stage will also feature two members of the ensemble performing a selection from the opera.' "These aren't pages in a book," says Koyczan, "these are pages of my life."


Performance poetry is the new kid on the poetry block, a kid with attitude. Fun, entertaining even, spoken word poets are winning new converts at a time when literary poets face diminished audiences. Spoken word poems are alive when performed but on the page, in comparison, they pale. Fortunately, the Mother Press Media, "an unconventional press for unconventional artists,"; includes a CD which reveals Koyczan's sly humour and great vocal timing. Listen to the CD first, then re-imagine Koyczan's cadences as you read the poems. Mother Press Media plans to produce more artists who "breach the boundaries of genre."; Perhaps this new publisher might consider a reversal: put out CDs of complete performances and attach a small sample of print. Either way, I look forward to more. 0-9738131-0-5