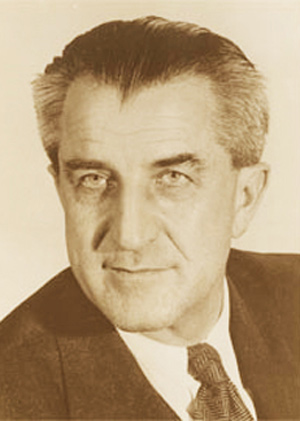 
Sentenced to death by both the Nazis and Communists when they overran his homeland, Czech Resistance fighter Vladimir Krajina was later revered as 'the Father of Forest Ecology in B.C.' in Cameron Young's The Forests of B.C. for his work classifying B.C. ecosystems. Krajina's early criticism of slash-burning practices and his creation of forestry reserves resulted in the creation of the 9834-hectare ecological reserve named in his honour by BC Parks in 1973.

Krajina survived capture by the Nazis to become a member of the postwar Czechoslovak Parliament, elected in 1945. He was Secretary General of the largest democratic Socialist Party when the government was led by Jan Masaryk. After the Communist takeover in February 1948 he escaped on skis to Bavaria. A few days later the family of Vancouver novelist Jan Drabek (who in 2012 wrote Krajina's biography for Ronsdale Press), followed the same route out. A year later Krajina was received by Winston Churchill at Chequers and thanked for his wartime efforts.

Krajina came to Vancouver in 1949 and taught plant ecology at UBC for 24 years. As a botany professor he led the team which identified and mapped this province's ecological regions and eventually became the Father of British Columbia's ecological reserves which have since been copied throughout Canada and the world. There are more than 150 of them in the province. Karjina published countless scientific articles on forestry, botany and ecology as well the section on Czech and Slovaks in British Columbia for a book called Strangers Entertained, published by the British Columbia Centennial Committee in 1971.

Krajina received the Order of Canada in 1981 and he received the Czechoslovak Order of the White Lion from President Vaclav Havel in 1990. Krajina wrote about his wartime exploits in his memoirs, High Stakes, published in the Czech Republic in 1994, and he has been subject of numerous Czech documentaries as well as Jan Drabek's book, Vladimir Krajina: World War II Hero and Ecology Pioneer (Ronsdale 2013), since translated by Drabek for publication in the Czech Republic where Krajina is revered for his patriotism.

Vladimir Krajina lived primarily at 4960 Chancellor Boulevard with his family (wife Maria, son Vlad Jr., daughter Milena) from the mid-1950s until his death on June 1, 1993. The UBC Department of Botany honours him with the annual Vladimir J. Krajina Memorial Lecture.

Several film documentaries and books reflect his varied life and attainments, most notably a biography in English by Jan Drabek and Krajina's own Vyoská hra (“High Game” or "High Stakes") published by Nakladatelstvi VTA, Prague, 1994.


I first glimpsed Vladimir Krajina thirty years ago when he stood, somewhat unsteadily, and maybe a little stooped, to dissect a forester who was giving the annual MacMillan Lecture in the old H.R. MacMillan forestry building at the University of British Columbia. I had absolutely no idea who was standing formally and speaking in perfect English, questioning the precepts of the entire lecture with regard to stated and achieved reforestation results. I wish I had known.

Jan Drabek's book, Vladimir Krajina: World War II Hero and Ecology Pioneer (Ronsdale 2013) has filled the gaps in my own (and, I suspect, many others') knowledge of this determined, stubborn, intelligent, and brave individual.

To myself and many, many undergraduate and graduate forestry students, Krajina was the icon of ecological knowledge and systematic land-based ecological classification. Drabek articulates his importance to forestry here in the second half of the book. Together with some of his most prominent students, Karel Klinka and Hamish Kimmins among them, Krajina definitively wrote the book of ecological classification, indicator plant species, and prescriptive reforestation practice for British Columbia. In addition, Krajina's work to establish the ecological reserves program in British Columbia was, and remains, a hugely important part of our natural heritage and scientific database.

What, to many, was unknown was the story - ably captured by Drabek - of Krajina's life and family before he arrived in Vancouver in 1949 as a political refugee. He came from the recently subjugated country of Czechoslovakia, a country that was released from Nazi occupation only four years previously, but was quickly immersed in what has been shown to be an equally sinister and criminal occupation by Soviet Russia. Drabek chronicles how Krajina was not only a professor of botany in pre-war Czechoslovakia but also fought alongside good friends against the German occupation as a member of the Czech resistance. Krajina lived through the execution of some of these friends - as well as his brother - at the hands of the Gestapo, and was separated from his beloved wife, Marie, for years (two of which she spent in the Ravensbruck concentration camp). In postwar Czechoslovakia, Krajina became an active member of a democratic Czech political party, living among a people steadily undermined by Soviet operators who tortured, imprisoned, terrorized and executed political adversaries. In 1948, along with his wife, mother-in-law, his teenage daughter and infant son, Krajina fled their homeland for the safety of the UK and eventually Canada.

I think that my life and the lives of many of the students around me in that early 1980s lecture hall would have been changed, perhaps forever, if we had known the story of this man's previous life told by Jan Drabek in Vladimir Krajina: World War II Hero and Ecology Pioneer. Although Krajina was a man known in BC for an almost religious fervor of devotion to sound ecological land management principles, he was also a man who had been a part of - and survived - one of the most tumultuous and violent decades of human history. Drabek refers to Krajina's generation as the "Greatest Generation,"; people who lived through the Great Depression and survived World War II. As a middle-aged parent and participant in the very global community of the "wood business"; I reflect that given today's many regional conflicts and great economic and political uncertainties, we as a people engaged in many layers of societal governance require the stamina, courage and integrity of a "Great Generation"; in order to move forward and continue to celebrate the good in our world.

[Reviewer Greg Antle is a hardwood specialist who lives in Fort Langley. This review was first published in British Columbia History, Spring 2013 | Vol. 46 No. 1]