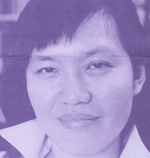 
Lydia Kwa works in Vancouver as a writer and psychologist.

Lydia Kwa's Oracle Bone (Arsenal Pulp Press 2017) subverts traditional tropes of Chinese mythology to tell a tale of greed, faith, and female empowerment. The story takes place in seventh-century China, a time of ghosts, martial arts, magic, fox spirits and demons. Empress Wu Zhao’s evil-minded lover Xie becomes obsessed with finding and possessing a magic object called the oracle bone that will bestow immortal powers on him. But blocking his way to the bone, is Qilan, an eccentric Daoist nun. Along the way, the many secrets and powers of the magic bone are revealed.

As the tale of concubines, convents, artists and the elaborate palace court of China's only female emperor, Lydia Kwa's The Walking Boy (Key Porter, $32.95) has a 'middlesex' protagonist, born both male and female, who ventures to the ancient West Capital of Chang'an in the 8th Century that is ruled by a bitter and aging female emperor. On behalf of the aging hermit monk Harelip, who raised him/her, Baoshi searches for her/his master's former lover and becomes embroiled in Tang Dynasty intrigue and a strange ghost story. "There are only three powerful women in the last five thousand years of Chinese history," writes Xinran Xue, author of The Good Women of China. "One of them is in this imaginative book written by Lydia Kwa." The Walking Boy is the second novel in a trilogy, following This Place Called Absence (2000). The Walking Boy (Key Porter, 2007) was shortlisted for the Ethel Wilson Fiction Prize in 2008.

Dedicated to the memory of Manuela Dias, a managing editor at Turnstone Press who died in 2001, Lydia Kwa's Sinuous (Turnstone $17) is a suite of memoir poems and lyrical narratives 'mapping various internal territories.' These narratives include her first years in Canada after arriving from Singapore with her '21-year-old body squeezed into Lee overalls and maroon suede Puma sneakers,' a collection of dreams, visits to Japan, reflections on trauma based on her experiences as a psychologist, the practice of the martial art of ki aikido and her responses to living in Vancouver since 1992. Lydia Kwa is the author of three novels and one poetry collection.

Lydia Kwa grew up in Singapore. Having arrived in Canada to study psychology in 1980, Kwa has lived in Toronto, Calgary and Vancouver. She received her B.Sc from the University of Toronto and her M.A. and Ph.D in clinical psychology from Queen's University. She was involved in trying to retrieve unpaid royalties to writers after the dissolution of Press Gang Publishers. Her writing has been variously praised by George Woodcock, W.P. Kinsella, George Bowering, Wayson Choy and Daphne Marlatt.

EMPLOYMENT OTHER THAN WRITING: clinical psychologist