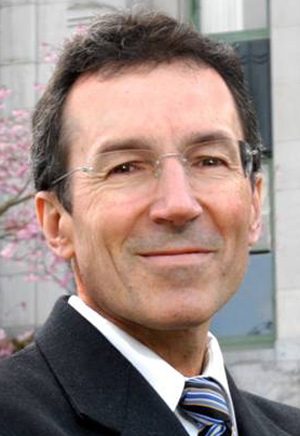 
Peter Ladner served two terms as Vancouver City Councilor in addition to being a journalist for 35 years. His newest contribution is The Urban Food Revolution (New Society Publishers 2011), a well-informed book on how to build a local, sustainable food system for cities.


Food is the new oil. Time magazine and The Walrus in Canada both ran cover stories in September on the social and environmental issues affecting food supply and quality.

When civil war broke out in ancient Egypt between Cleopatra and her brother, Rome's Julius Caesar intervened and made Egypt a Roman protectorate, but not out of the goodness of his heart. Caesar was thinking of an organ a bit lower in the toga. Rome was already so populous it was dependent on imported Egyptian grain-the bread for its circuses.
The magnificent pre-Columbian cities of Central America were "mysteriously"; abandoned by their occupants.

Excavation of the surrounding farmland has since suggested the more likely explanation for their demise was that Mayan cities simply out-grew the ability of their hinterlands to feed them.

For centuries, as long as most people on the planet lived on the land, in rural villages or small country towns, the occasional urban catastrophe was small potatoes. But then the Industrial Revolution in Europe and North America created multiple large cities filled with people who had left the hard agricultural life for jobs in manufacturing and transportation.
Humankind has temporarily solved the problem of feeding itself by industrial ingenuity-devising railroads and refrigeration, breeding plants and animals for higher yields and longer storage life, but usually at the expense of flavour and nutritional value.

"You are what you eat,"; said back-to-the-land hippies in the sixties. Much earlier the 18th century gourmand Jean Anthelem Brillat-Savarin had said, "Tell me what you eat and I will tell you what you are.";

Now, for about five decades, we have been living in a state of high anxiety, as the problems of energy, clean water, global warming and runaway technology (genetically modified foods) have leapt from our TV screens into our frying pans.

After reading the opening chapters of Peter Ladner's The Urban Food Revolution, most urbanites and suburbanites will likely agree with his perspective: "The growing gap between our immediate world and the distant worlds that feed us is starting to gnaw at people. They see pieces of their lives fraying, and they see how much of that disintegration is related to the food they eat-or don't eat. They see the most primal element of personal survival put into the hands of underpaid foreign workers, a few large corporations, and distant mega-farms and processors dependent on diminishing supplies of cheap oil and water.";

World class cities have world class problems and one of them is that they have become "food deserts"; where the only dessert on the menu is strawberries that travelled two thousand miles to the table with a dollop of aerosol whipped topping whose label assures us it is an "edible oil product."; Big cities become places where only the rich can afford to enjoy 'authentic' foods.

Increasingly all our environmental problems are connected-but as Peter Ladner convincingly points out that might actually be a good thing; because the solution to one problem could go a long way toward solving others.

The town of Ladner, where Peter Ladner grew up, was named for his great grandfather.

Ladner is qualified to write about food and the environment not because he's a farmer, (he's not), but because he's had the experience of watching a small rural village, surrounded by farms, gobbled up and paved over to provide suburban housing as an aggressively expansionist Metro Vancouver pursues its dream of becoming a "world class city,"; as local journalists never tire of saying.

A journalist who was drawn into local politics and served two terms as a Vancouver city councilor, Ladner worked to get the issue of food security onto the council table and also served as a liaison to the Vancouver Food Policy Council. Partly as a result, Vancouver has a food charter and added over 2,000 food-producing community garden plots as part of the 2010 Olympic and Paralympic Games legacy.

The Urban Food Revolution grew out of Ladner's activism. It provides a fascinating and well-researched overall guide to a movement that is gaining momentum in large cities all over North America and Europe-the 'taking back' of urban turf by green and leafy things that are good for you.

The process embraces every approach from the very simple-such as window-boxed tomatoes and herbs or turning your lawn into a potato patch-to the ingenious-such as rooftop gardens on buildings. Socially complex; neighbourhood community gardens on vacant lots actually appear to reduce crime and ameliorate homelessness by providing food and a sense of pride and satisfaction to local people.

"Agriculture is the new golf,"; he writes. That chapter heading isn't as whimsical as it first seems. I laughed when I read Ladner's admission that he'd ripped up his Kitsilano front lawn to plant fruit trees, vegetables and berries because a few years ago I, too, started replacing decorative hedges with rows of blueberry bushes and raspberry canes, replacing ornamental shrubs with fruit trees, digging up more lawn and planting more potatoes (the herbaceous border you can eat).

Growing and eating your own food is a heck of a lot more satisfying than whacking a ball around, (or mowing) a vast expensive and inedible patch of grass.

Anyone who grew up in Vancouver over the last four or five decades, like Ladner, has also seen the process of 'food desertification' first hand. Vancouver's hinterland used to be the Fraser Valley, "bottomland"; rich in topsoil spread by the Fraser River for millennia. Local produce was so abundant it supported a food-processing and export business under the Fraser Vale label, until 20 years ago.

In the 1950s and '60s when I was a kid, Richmond was divided up into small holdings intensely cultivated by Chinese farmers who sold to local supermarkets-which now get their produce from California or Mexico-or off the backs of trucks that would just come to our neighbourhoods in North or West Van and park, drop the tailgate and draw a crowd of housewives with baskets and bags.

Most of the rich fertile (and limited) local land that produced the vegetables I ate as a child is now under asphalt and concrete, covered by houses and condos, sacrificed to rising land taxes and real estate speculation.

But The Urban Food Revolution provides the sustenance of hope for change.
9780865716834

Review by novelist and critic John Moore, who doesn't play golf in the Garibaldi Highlands.