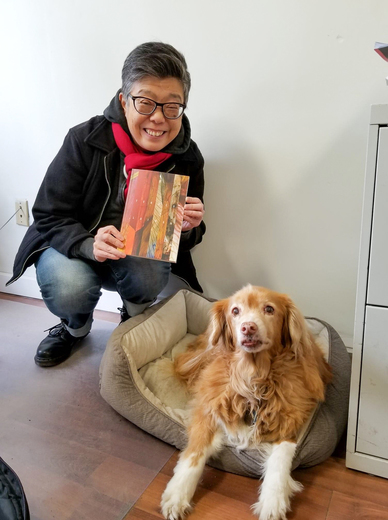 
Of Chinese origin, Vancouver-based author Laiwan is described as reticent and modest, "shying away from the spectacular." Raised in Rhodesia (now Zimbabwe) and taught by German nuns, she immigrated to Vancouver with her family and attended Britannia Secondary School where "she stumbled into poetry" and became interested in printing. After studying at Emily Carr College and being influenced local musicians, she gained an M.F.A. from SFU and founded the OR Gallery in 1983. She was Chair of grunt gallery's board from 2010 to 2014. Laiwan?s debut collection of poetic inquiry into our shared human-animal condition, TENDER (Talon $18.95 / 2020), offers "a radical and decolonizing cleansing of all that oppresses and alienates." 9781772012514


Laiwan is an interdisciplinary artist, writer and educator with a wide-ranging practice based in poetics and philosophy. Born in Zimbabwe of Chinese parents, her family immigrated to Canada in 1977 to leave the war in Rhodesia. Her art training began at the Emily Carr College (1983), and she returned to academia to receive an MFA from SFU School for Contemporary Arts (1999). Recipient of numerous awards, including recent Canada Council and BC Arts Council Awards, and the 2008 Vancouver Queer Media Artist Award, Laiwan has served on numerous arts juries, exhibits regularly, curates projects in Canada, the US, and Zimbabwe, is published in anthologies and journals, and is a cultural activist.
Leading up to her project Distance of Distinct Vision in 1992, and since then, Laiwan has been investigating colonialism toward a decoloniality. Further, since 2000, she has been investigating embodiment through performativity, audio, music, improvisation, and varieties of media, along with bodily and emotional intelligence, so as to unravel and engage presence, toward a greater understanding of what could be non-colonial.
Recent public commissions have also enabled her to focus on issues of urban development, touching on poetic and philosophic themes related to current questions of environment and the built cityscape of Vancouver.
Recent projects include a process-based investigation of street trees in the city, titled Maple Tree Spiral: the pedagogy of a tree in the city, at Artspeak Gallery located at the convergence of Maple Tree Square in Gastown, Vancouver, BC; a public art commission by Translink and the City of New Westminster, on the theme of phytoplankton and in collaboration with UBC?s Department of Earth, Ocean and Atmospheric Sciences ? titled Wander: Toward a Lightness of Being ? installed at the 22nd Street Skytrain Station in New Westminster, BC; and an artists residency / public art commission working with communities surrounding Simon Fraser University Sustainable Energy Engineering Program?s new building in Surrey, BC.
Laiwan participates in public discourse and enjoys contributing to discussions, panels, symposia, conferences and philosophy cafes. She happily gives lectures, artist?s talks and workshops at a variety of venues including art programs, universities, galleries, community centres, and living rooms.
Based on the unceded territories of the Musqueam, Squamish, and Tsleil-Waututh First Nations, she founded the OR Gallery in 1983 in Vancouver, Canada, was Chair of the grunt gallery Board of Directors from 2010 to 2014, and she teaches in the MFA at Goddard College (2001-present), currently based at the satellite site in Washington State, USA.