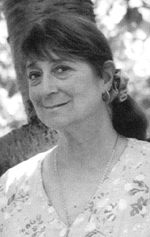 
Barbara Lambert was born and raised in the Okanagan Valley, studied at the University of British Columbia, married a fellow student and raised three children while writing fiction and establishing a Vancouver business in textile design. Her written work (including the winner of the 1996 Malahat Review Novella Prize) has been published in a variety of literary magazines, and in the Journey Prize Anthology.

Lambert's story collection A Message for Mr. Lazarus was chosen by The Globe and Mail as a notable book of the year, and was winner of the 2001 Writers' Union Danuta Gleed Award for best first short story collection, and a B.C. Book Prize finalist. Her novel The Allegra Series, published in 1999, weaves the tale of a contemporary love triangle together with ancient myth and the history of textile design. [See below]

Set against a landscape where hills still shelter secrets from Etruscan times, Barbara Lambert's The Whirling Girl (Cormorant, 2012) explores the layered nature of desire, and asks what really are the conditions that foster art, or love--or the unearthing of civilization's buried stories. As a child, botanical artist Clare Livingston was enthralled by her uncle's tales of lost civilizations. Now, after years of estrangement, she has unexpectedly inherited his property in Italy. She travels to the hill town of Cortona hoping to find the meaning of this disturbing gift, left by the uncle who fled his family when she was a teen. Instead she is swept up in a world of archaeological intrigue where new friends and lovers reveal suspect aims. Her evasions lead her along a twisting path until--as even her ability to paint is compromised--she is forced into an excavation of her own complex history.

Lambert's 2021 novella, Wanda (Fish Gotta Swim $20) is set in the Okanagan at the start of WW2. A young German Canadian girl, Eva gets a new friend when Wanda, a child refugee from the London blitz, moves to her town. But Eva fears Wanda will abandon her when she learns Eva's family has been branded as German enemy aliens. It's a time when B.C.'s interior towns are rife with prejudices. The story focuses on young Eva as she grapples with the realities of guilt, innocence, shame and love for her family.

Having lived in Vancouver, Ottawa and Barbados, Lambert returned to the Okanagan Valley, where she lived on a cherry orchard, in Penticton, with her husband Douglas Lambert.

PLACE OF BIRTH & CITY OF RESIDENCE:

Articles: 1 Article for this author
The Allegra Series
Press Release


Weaving finely spun filaments of the lyric and mythic, Barbara Lambert creates a vivid tapestry of a year in the life of Vancouver's Allegra Schliemann, a middle-aged woman in the throes of a knotty love affair with a married man, a newly-crafted career as an artisan and a battle against a debilitating disease. Unable to see her way clear of the emotional clutter these changes wreak, Allegra hires would-be artist Brad Lindhall to fashion her a mirrored wall, praying it will bring light and clarity into the encroaching dusk of her own life. Meanwhile, in Toronto, Brad's estranged wife Mona researches a work known as A Brief History of Cloth and Clay for an upcoming installation, her voice reaching into the past and across the country. Like her many mythological predecessors--Philomela, Ariadne and Athena--Allegra encircles lovers, entraps enemies and unfurls in the face of adversity.