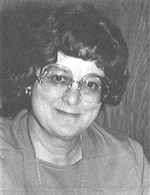 
"I was told that women don't go to university and women don't become writers. Only the rich could be writers." -- Betty Lambert

Betty Lambert was born in Calgary, Alberta on August 23, 1933. "My father died when I was twelve and I was no longer 'working class,' I was 'welfare class' and I was determined to get out of that class. Writing was a way out but soon it became more than that, it became a necessity."; Lambert became a socialist in her teens. She said she used her anger to fuel her art. She moved to Vancouver in 1951 to attend UBC, worked as a copywriter at a local radio station and graduated to writing radio plays for CBC. She published Three Radio Plays (Burnaby: West Coast Review Publishing Society, 1985) containing GRASSHOPPER HILL, FALCONER'S ISLAND, THE BEST ROOM IN THE HOUSE.

Among her plays for children The Riddle Machine (1966) was performed at Montreal's Expo in 1967. In her late 20s, Lambert became embroiled in feminist issues which permeated most of her best work for the stage. In 1965 she became a part-time lecturer of English at Simon Fraser University, where she was later made an Associate Professor (with only a BA in Philosophy and English) teaching modern and Greek drama, Shakespeare and linguistics.

Betty Lambert raised one daughter as a single parent and produced approximately 60 plays for radio, television and stage. Sqrieux-de-dieu (Talonbooks, 1975) gained renown as a witty and outlandish sex comedy about a mÃ©nage a trios. Jennie's Story (1983), her most powerful work, was based on a true story from southern Alberta in the 1930s, when a priest had his 15-year-old housekeeper, whom he seduced, taken to a mental institution and sterilized. She is told she has an appendectomy. Later, married and unable to conceive, Jennie learns the truth and commits suicide. Under the Skin (1985) is based upon a true Vancouver story of a man kidnapping and sexually abusing a twelve-year-old girl for six months. Lambert won ACTRA's Nellie award for best radio play in 1980 for Grasshopper Hill, a drama about a Canadian woman who has an affair with a Jewish survivor of Auschwitz.

Crossings, her only novel, is a penetrating study of female masochism. It's called Crossings because the man and the woman repeatedly "cross over" the Burrard Bridge from opposite worlds. Mik O'Brien, a violent and virile ex-con, crosses over to Vicky's rooming house at 2952 West 8th Avenue. Vicky Ferris, a CBC dramatist, crosses over to the coarse but truthful world of Mik and his cronies at the St. Helen's Hotel (later called Theo's) on Granville Street. It is a riveting account of female sufferings, mental and physical, with flashbacks to a failed marriage and an illegal abortion in East Vancouver. Unable to extricate herself from Mik O'Brien's influence, Vicky is raped, gets pregnant, demands marriage, discovers the pregnancy alarm was false, retreats to Berkeley, gets pregnant by a stranger and keeps the baby. The skilful clarity of the writing convincingly evokes the protagonist's passion and restlessness.

"Maybe it's one huge orgasm, this book. Maybe I just want to remember it once more before I go menopausal. Maybe I just want to feel young again and real and alive. The Victorian era. Repressed lust. But to the girdle do the gods inherit. Down from the waist they are centaurs... Perhaps I shall go mad and run naked down the street at night, waving my bum behind me like a flag. Perhaps I shall leap on beautiful young men, a moustache on my lip. Oh god, it's not fair to grow old. It's not fair. I hate it. I really do." The book gained the disapproval of one Vancouver feminist bookstore, but its boldness impressed most critics. It was published in the U.S., with limited success, under the title of Bring Down the Sun.

Betty Lambert fought a six-month battle with cancer in 1983. "In the manner of her death," recalls friend and actor Joy Coghill, "she was absolutely extraordinary. It was one of her greatest gifts to us." Cancer of the lung was spreading through her body. Lambert persevered against the disease and dismissed suicide on rational, philosophical and moral grounds. She continued to write, frustrated by lack of time but also impressed with the urgency that the immediate prospect of death brought to her work. "I have so much to do and no time to die," she wrote to Coghill. She composed her own memorial service, including her favourite Gerard Manley Hopkins' poem, "God's Grandeur," to celebrate life. On August 9th, she completed her final play, Under the Skin. Jenny's Story and Under the Skin were republished (Toronto: Playwrights Canada Press, 1990).

In her final days, blind and unable to speak, she enjoyed playing Trivial Pursuit with her sister, Dorothy Beavington. Beavington recalls, "On the night she died she indicated she wanted her yellow writing pad and her pen. She wrote, with much effort, 'Dot, one last trivia question.' I asked Betty if she wanted me to ask her a question and she vigorously pointed to her own chest to indicate she was definitely asking me. Then she wrote, 'What is the final demand in life?' I said I didn't know but I was sure that she did. She nodded. Then she slowly wrote her answer, which was, 'More and more and more nostalgia.'"

Lambert was remembered by her colleagues and friends at a Simon Fraser University memorial service on November 21st, 1983, following her death on Novenmber 4, 1983 in Burnaby. SFU subsequently established a playwriting award for SFU students in her honour. Lambert was the subject of an interview conducted by Bonnie Worthington fore a special issue of Room of One's Own devoted women and theatre, edited by Eleanor Wachtel.

Articles: 1 Article for this author
Bibliography

PLAYS
The Apartment "Nobody Knows I'm Here"
telecast 6/Jan/1976
The Closet
The Human Element
The Infinite Worlds of Maybe (by Lester Del Ray, adapted by BL)
Lilacs and Lillies
1961
No Love Lost
Prescription for Love
28/Aug/1962
Return of a Hero
production 8/Dec/1960
Tumult with Indians
When the Bough Breaks
telecast 13/Apr/1971

STORIES
Banff School
Bending Sickle
Bingo
Black Gold
Blue Chow
The Black Nightgown
Cinderella Man
Dance of the Moon
1948
Don't Bring Him in the House*
1957
The Dream
French Seams
The Guest Room Curtains
Guilt
1978
The Hen Who Forgot How to Hatch Her Eggs
How We Married Mother
Just a Little Game
Kiss Googie Winthrop
Last Dinner
1975
Lollypalooza and Jim Molockee
No Love Lost
No Yesterdays
1950
Nobody Knows I'm Here
1980
The Personal Column
The Pony
Prairie Fire*
1956
Pronounce it Ay to Ryhme
The Rebel
So Much More
1947
A Story!
The Strange, the Foreign Faces*
Swiss Cottage
Sylvia
Tatiana
That Mrs. Benton (as "C. Thomas")
Them as Has Pride**
1957
This Side of Tomorrow
1962
The University Life*
1956
Tony
The Unloved
1950
The Victory
The Wasted Years
Winter Never Comes
A Woman in Love
1956

*Written for English 401 at UBC, taught by Earle Birney.

**Written for English 409 at UBC, taught by Earle Birney.
www.bettylambert.ca