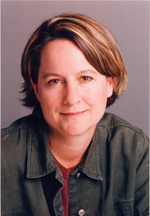 
After living for a decade in Toronto, Vancouver-born Shaena Lambert moved back to Vancouver, where she now lives with her partner, Bob Penner, a political consultant, and their two children -- Peter and Lucy.

Her story collection, The Falling Woman, was chosen by the Globe and Mail as a notable book of the year. It was also selected as one of the Toronto Star's best Spring fiction debuts for 2002, and shortlisted for the Danuta Gleed Award. Lambert's stories and poetry have been published in literary journals in Canada and the US, including in the Journey Prize Anthology.

Her first novel Radiance (Random House 2007) concerns the relationship between an 18-year-old survivor of the Hiroshima atomic bomb blast, Keiko Kitigawa, who is chosen from hundreds of young women to receive plastic surgery in the United States, and her suburban hostess, Daisy Lawrence, who has been assigned the task to pry the girl's traumatic story from her to serve the propaganda needs of the committee that has sponsored her visit. In 1952, when Keiko is brought to America for charitable reconstructive surgery, McCarthyism is on the rise and experiments to develope the hydrogen bomb are underway. A complex intimacy ensues between the "Hiroshima maiden" with her disfiguring radiation scars and her host mother who has hidden wounds arising from whispered ered confessions and wrenching betrayals.

Articles: 2 Articles for this author
The Falling Woman (Vintage $22.95)
Info


Stories linked by an archetypal woman who marches down Main Street topless, seduces married men and explores losses that pre-date her birth. Lambert lives in Vancouver. 0-679-31149-1


Carol Matthews' debut collection of fiction, Incidental Music, consists of seven linked stories about several couples, mainly Tannis and her husband Stephen. Before she wed, Tannis's father had told her "There has to be give and take in a marriage. You'll find the lasting value of a marriage appears not at the beginning but later, towards the end. It is a journey, not a destination."; The couple go on to cope with aging and abandonment, buoyed by the consolations of maturity and a lasting union. Music also connects the lives of Matthews' characters.

Born in Vancouver, Carol Matthews was an instructor and dean at Malaspina University-College, where she has continued as an Honorary Research Associate. Her first book, The First Three Years of a Grandmother's Life (Ryerson, 2006), is a collection of her quarterly columns from Relational Child and Youth Care Practice, written from her perspective as a grandmother, and self-illustrated. She lives on Protection Island, along with her husband, Mike, and Victor, their "poet dog."; 978-088982-234-4