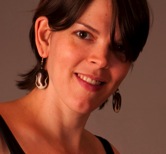 Sarah Lane is the author of The God of My Art: A Novel, released by Purpleferns Press in June 2013 and longlisted as a quarter-finalist for the 2012 Amazon Breakthrough Novel Award.

The title-The God of My Art-is a twist on the traditionally female muse or goddess of art. The novel explores a young woman's obsession with a lover as a source of inspiration in becoming an artist and for creating art.

In addition to poetry and short fiction, she dabbles in literary translation. Her work has been published in literary and scholarly journals, including The Antigonish Review, Roar Magazine: A Journal of the Literary Arts, think equity, Wreck Magazine, Educational Insights, Capilano Courier, and Quills: Canadian Poetry Magazine.

Lane was born in California and raised in rural British Columbia. She began writing in high school, penning her first poem for circulation in the school newsletter. She received her undergraduate education in international relations at the University of British Columbia, during which time she studied abroad for a year in France at l'Institut d'études politiques. She also took elective courses in writing with acclaimed writers Tom Wayman, Crystal Hurdle, and Sharon Thesen. After working several years at the Canadian central bank as an analyst specialized in counterfeit detection, she returned to the University of British Columbia to study literary translation under Rhea Tregebov and George McWhirter. She served as a reader for the 2005 PRISM International short story contest and received her master's degree in comparative literature in 2006. As her graduating thesis, she offered a partial translation of Yann Apperry's Diabolus in musica, winner of the 2000 Prix Medicis. Since completing her graduate studies, Lane has taught English to immigrants and refugees in Canada, meeting people from all over the world who inspire her with their experiences and stories.

In her fiction, Lane likes to explore the tension between fatedness and personal responsibility. She pits her characters against inequality, poverty, racism, and misogyny to explore the psychology of their struggles to retain a sense of dignity and self-determination as well as a voice. She is drawn to the experiences of migrants: to the alienation, anxiety and loss of concrete identity that displaced people endure and which she tasted in small part as an expatriate living abroad. In her writing, she also follows the migrations that take place within a same country, such as the move away from the wilds of the Canadian landscape toward the big cities, and those that occur within the mind, such as the crumbling of belief systems where certitude gives way to doubt.

From the Back Cover:

"Helene vividly remembers that night in Prince George when her alcoholic mother threatened to leave. She also cannot forget the day her stepfather sent her away to a group home. Now, years later in Vancouver, she has met a man who can make her forget all that.

"The God of My Art is layered with unforgettable scenes of youth, obsessive love, and artistic longing. At the core of this haunting coming-of-age tale are the shifting faces of Helene-teenage runaway, university student, and budding artist. Related in Helene's engaging voice, this novel chronicles her seminal love affair with Matthew, a globetrotting mountaineer passionate about Nietzsche, and the art he inspires within her. As she wrestles to become the artist she wants to be, she encounters unforgettable characters along the way, including Hana, a lesbian theatre student fed up with her partner's multiple affairs, and Laurent, a French exchange student who grapples with existential questions of his own."