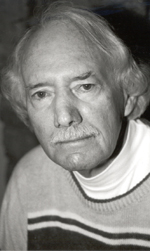 
Born in England, prolific but unheralded Ernest Langford came to Ontario as a young man before moving to B.C. His textbook The Explorers: Charting the Canadian Wilderness has been used in classrooms across Canada. He wrote numerous scripts for stage, radio and television but public success eluded him. With the long-standing support of his 'indefatigable comrade' and wife Carol, Langford doggedly pursued the craft of fiction with their Battle Street Books imprint, eschewing in-person publicity in favour of an internet site. From Kamloops, Langford produced Rendezvous at Dieppe (Harbour Publishing, 1992), published on the 50th anniversary of Dieppe, The Apple Eaters (1994), a mystery set in Vancouver, Survival Course, about smalltown devientcy, Necessities of Life, a family saga, Rosie & Iris (1995), about how a rape affects the relationship of two sisters, and his 571-page The Wax Key, a tale of social climbing in England during the 1930s and '40s. Langford's books were mainly available via Gordon Soules Book Distributors in West Vancouver. He made much of his work available on the internet. He died on December 1, 2006 in Kamloops.