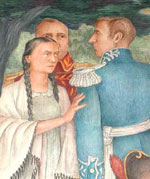 
Beauties of her kind one may find, though seldom, only in Italy, Portugal and Spain." -- Langsdorff describing Doáa Concepción Argüello

A rare Russian visit to California in 1806 is described for nearly 70 pages in the journal of German-born George Heinrich Von Langsdorff, one of the few scientists to visit the coast of the Pacific Northwest in the first half of the 19th century. Hired to served as a naturalist for the first Russian circumnavigation of the world, Langsdorff, along with employer, Nikolai Petrovich Rezanov, left that expedition in 1805 when their ship became stranded at New Archangel, Alaska, due to lack of provisions. As the Czar's overseer of the Russian-American Company, Rezanov presumptously hatched a plan to replenish the Russian colony's supplies by sailing to California and buying provisions from the Spanish.

In the spring of 1806, Rezanov and Langsdorff accordingly sailed south from New Archangel, having purchased the Juno from American sea captain John D'Wolf. Along with five of D'Wolf's crewmen, they sailed with copies of charts made by Captain George Vancouver, delivered to the Russians in Alaska by the global explorer Kruzenshtern. Weakened by hunger and disease, much of the crew was barely fit for duty but having departed on March 8, they reached San Francisco Bay in early April, 1806.

To communicate his wishes, Rezanov relied on his German physician Langsdorff, who landed first, hoping to communicate in French. As luck had it, the provincial governor and the regional military commander were both absent at Monterey, leaving the military commander's amiable son in charge. The Russians were invited ashore where Langsdorff managed to converse with Franciscan Father Uria by speaking in Latin. Russo-Spanish trade was forbidden, but cordial relations were engineered by Langsdorff. Rezanov began a politic love affair with the 15-year-old daughter of the Spanish governor Arrillaga, Doáa Concepción Argüello. Overcoming language and religious barriers, the couple became betrothed prior to Arrillaga's return. "She was distinguished for her vivacity and cheerfulness," wrote Langsdorff, "her love-inspiring and brilliant eyes, which pierced his inmost soul, and her exceedingly beautiful teeth; for her pleasing and expressive features and for a thousand other charms. Yet her manners were perfectly simple and artless. Beauties of her kind one may find, though seldom, only in Italy, Portugal and Spain."

The historian Bancroft has placed a less romantic spin on events. "It must be confessed," he wrote, "that this celebrated courtship had a solid substratum or superstructure of ambition and diplomacy.... And it was not until other expedients had failed that Rezanov pressed his suit so far as to propose." Langsdorff said as much, admitting Rezanov's betrothal was a "vast step gained towards promoting the political objects he had so much at heart." The path of true love did not run smooth. Rezanov, a widower since 1802, was not a Catholic, so Arrillago would not allow the marriage to proceed in haste. The bride and groom required permission to marry from the Pope and the Czar respectively.

After their six-week stay, Rezanov and the Russians departed in the Juno on May 11, 1806, laden with the necessary supplies they needed for Sitka, although no record of their trade was recorded in local records. Hastening back to Russia, Rezanov contracted pneumonia, fell off his horse and died in 1807. Having postponed their wedding date until 1808, the broken-hearted bride-to-be didn't receive the terrible news until five years later. She only learned the details of the death from Sir George Simpson during his visit to San Francisco in 1842. The beautiful Doáa Concepción Argüello never married. Finally, after California had become a Mexican territory, then an American possession, she entered the Sisterhood of St. Dominic at Monterey in 1851, at age sixty. Three years later she moved with the Sisters across the bay to Benicia where she died on December 23, 1857.

Although the visit of Rezanov and Langsdorff gave rise to the Russian outpost of Fort Ross in California in 1812, Russian fur traders never established any permanent settlement on the coast of British Columbia. The Hudson's Bay Company and the Russian-American Company signed a non-competitive pact that endured from 1829 until 1867, thereby limiting the need for Russia to explore the Pacific beyond its North Pacific holdings.

The first Russian circumnavigation of the world (that partially included Langsdorff) was commanded by Adam J. Von Krusenstern in the Nadeshda with sub-commander Urey Lisiansky in command of the Neva. Both published their own accounts of this voyage that included teenaged Otto Von Kotzebue who was later hired by Count Romanzoff to search for the 'North East Passage' in the brig Rurick in 1815. Kotzebue's three-year voyage included several scientists and the French artist Louis Choris. It was followed by a second three-year expedition by Kotzebue to the South Pacific in 1823-1826. Naval officer Vasilii M. Golovnin reviewed earlier Russian activities in the North Pacific within a memoir entitled Memoirs of a Captivity in Japan, then he filed a denunciation of the Russian fur trading activities in Alaska under Shelikov and Baranov following his 1817-1819 voyage. The final Russian voyage of discovery to the north Pacific was conducted by Feodor Lutke who published a massive but exceedingly rare volume in Russian.

Langsdorff (1773-1854), having travelled extensively with John D'Wolf to reach Europe, returned to Germany where he tried unsuccessfully to manage a company that facilitated immigration to Brazil. He retired to his home in Frieberg where he completed his memoirs. An artist with the 1806 Russian expedition named von Tilenau provided the first printed view of San Francisco within Langsdorff's book when its two volumes appeared in German as Bemerkungen auf einer Reise um die Welt in den Jahren 1803 bis 1807 (Frankfurt: Friedrich Wilmans, 1812). A first edition is worth more than $8,000 U.S.

Kotzebue, Otto Von. A Voyage of Discovery into the South Sea and Beering's Straits, for the Purpose of Exploring a North East Passage... in the Ship Ruruck (Weimer, 1821; London, 1821; Amsterdam, N. Israel, 1968)

Rezanov, Nikolai. The Rezanov Voyage to Nueva California in 1806. The Report of Count Nikolai Petrovich Rezanov of His Voyage to That Provincia of Nueva Espana from New Archangel. An English Translation Revised and Corrected, with Notes Etc. by Thomas C. Russell. (San Francisco: The Private press of Thomas C. Russell, 1926).