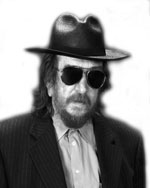 
Aboriginal lawyer Jesse Crowchild is a recovering alcoholic dealing with the death of his son and separation from his wife at the outset of Frank LaRue's first mystery novel, Innocent Until Proven Indian (Vancouver: Totem Pole Books $21). After a realtor is found dead in a Vancouver hotel room, Crowchild discovers his best defence for the accused Jimmy Greyeyes is to find the perpetrators of the crime. Greyeyes had a confrontation with the murdered realtor only hours before he was killed, and his fingerprints are on the murder weapon, but Crowchild believes his client is innocent. Greyeyes' sister was once raped by the murder victim and two of his companions, circumstantial evidence that encourages police to simplify the case. LaRue, who has written for Aboriginal publications such First Nations Drum since the early 1980s, was inspired to write Innocent Until Proven Indian after reading a heart-wrenching letter that describes a rape similar to one that serves as a backdrop to the novel.

Frank LaRue's second mystery novel, Finding Carrie George (Totem Pole, 2009, $18.95), follows private investigator Mike Morningstar, after 15 years with the RCMP, as he tries to track down an Aboriginal girl and former high school honour student who got lost in the world of prostitution and drug abuse in Vancouver's Downtown Eastside. Vancouver police refuse to admit a serial killer could responsible for the disappearances of women. The investigation takes Morningstar to Winnipeg where he finds clues within that city's sex trade. 978-0-9735840-3-5