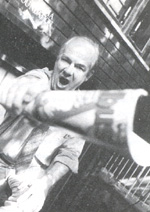 Founder and publisher of Adbusters magazine, Lasn was born in Tallinn, Estonia, in 1942, during World War II, and spent childhood years in a German refugee camp for displaced persons. At age seven he immigrated with his family to Australia where he gained a Science degree in Adelaide. He immigrated to Vancouver from Japan with his wife Masako Tominaga in 1970 after making 'a lot of money' with his own market research company in Tokyo. In 1989 he produced a 30-second message about disappearing old-growth forests in the Pacific Northwest and discovered TV stations would not sell him airtime. This epiphany -- "there is no democracy on the airwaves" -- led to the creation of Adbusters magazine in 1989, along with his Powershift Advertising Agency and the Culture Jammers Network. He now encourages all citizens of the world not to get lost as 'hapless consumer drones' with his alternative media initiatives such as Buy Nothing Day and TV Turnoff Week. "The first agenda of the commercial media is, I believe, to sell fear," he writes... "Fear breeds insecurity--and then consumer culture offers us a variety of ways to buy our way back to security."

Lasn is credited as one of the founders--if not the founder--of the Occupy Movement. Adbusters invented the notion of Occupy Wall Street and Lasn registered the movement's website. "For the past fifteen to twenty years," he says, "we at Adbusters have been saying we have to jump over the dead body of the old left. I'm not at all interested in the political left, unless it's this new horizontal left that's coming out of Occupy."

He lives on a small farm outside Vancouver.

Culture Jam: How To Reverse America's Suicidal Consumer Binge--And Why We Must (Eagle Brook, 1999). Also; Culture Jam: The Uncooling of America tm (HarperCollins, 1999).