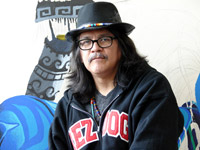 And he wants to change the way you think.

"I don't kai-yai around,"; says the artist -- whose name is pronounced Yux WAY lup tun

By that, Yuxweluptun means he won't appear in First Nations regalia to simplistically beat a drum for genteel greetings at civic events dominated by white liberals who like to congratulate themselves for being progressive enough to admit they have co-opted unceded territories-but do nothing about restitution.

Instead Yuxweluptun, who prefers the word Indian, says he was educated at the University of Knowledge of the Cedar Tree and he wears t-shirts that tell white folks B.C. YOUR BACK RENT IS DUE! or I AM HAVING A BAD COLONIAL DAY. As a neo-surrealist painter (influenced by Salvador Dali) and a polemicist, he is not interested in being polite.

An artist since 1985, the Vancouver-raised activist received his hereditary name Yuxweluptun (Man Who Possesses Many Masks) when, as a teenager, he was ceremonially initiated as a longhouse dancer among the Cowichan Coast Salish people (His father is Cowichan). More recently, he received the name Let'lo:ts'teltun, meaning Man of Many Colours.

He is no relation to the outspoken North Vancouver activist Andrew Paull who was active in the 1950s, but his cutting edge rhetoric is reminiscent of how far ahead of the curve Paull was. His mother, Evelyn Paul, was an executive director of the first provincial Aboriginal women's organization, the B.C. Indian Homemakers' Association, and his father, Benjamin Paul, was active in the Union of B.C. Indian Chiefs, Native American Indian Brotherhood and the Confederation of Native Indians of B.C.

Here are edited excerpts from his Artist's Statement for the new book Unceded Territories (MOA / Figure.1 $45) with text by Karen Duffek and Tania Willard, to coincide with the opening of his exhibition of the same name at UBC's Museum of Anthropology, a place he has referred to as the Indian morgue.

British Columbia joined the Dominion of Canada without the written consent of Aboriginal people. This is a non-treaty province. Your back rent is due, British Columbia!

I suggest that we call this province what it truly is: the Northwest Coast Territory, or NWCT. My other title proposal is the Traditional Native Territories, or TNT...

I'm not a traditionalist, though I did my Black Face dancing, I did my masked dancing, and I have traditional philosophy. But my work is for the world. Natives already know what it feels like having a bad colonial day. We wake up to it. Reading the paper again, reading about some Indian woman being killed or some Indian man being slashed up and beat up - there's always something there. And they're not always good Indian men: Indian men killing Indian women, brown on brown. It's disheartening. Where does that violence come from? There's this whole world of clashes of culture and time, and it's not something you see on a totem pole...

It's been my life's goal to portray the negative and positive realities of this world. I'm interested in recording history: residential schools; global warming, deforestation, and pollution; worldwide concerns such as the hole in the ozone layer; environmentalism, humanities, humour, and existentialism.

If you allow only the colonialists to record history, they record it to their own glorification. I wanted to take that position of power, of historical painting, and put it into my own hands - take possession of history.

We as Native people exist in a Canadian apartheid, imprisoned under the Indian Act.

Quit hiding behind names, Canada. Let's call the Indian Act what it is: The White Supremacy Act.

If we can celebrate Canada Day and the Queen's birthday, even Thanksgiving, we have to include Aboriginal Day as a national holiday for Natives and non-Natives alike, to start a new relationship.

We have to get along at some point, so how do you deal with post-residential school, colonization, and stress-disorder syndrome? I want the pope to apologize and pay for the sins of all his priests. It was a sin to create a genocide, to try to abolish my culture, my language...

I suffer from colonial stress-disorder syndrome every day, not being able to speak my language.

How do you rectify these things? It's not easy, I've been watching our plight in this country, and what I want to do is talk to the world. That's why I paint.

I just happen to be part of the modernist movement in the Native community that is taking the translation of our cultures in new directions.

Just like the originators of pointillism, cubism, and expressionism, I have created visionism, and I am the originator of the contemporary art form of ovoidism. Like those contemporary artists before me, I felt the need to break from traditional art forms, and have been at the forefront of amalgamating the past with the present.

Immigrants are my hobby. I want them to understand who they are.

Having treaties is not the answer to the Indian problem in this province. It's our land, and we don't have to sell it. Some Indians are very poor, and I don't blame them for wanting money right now. But in the meantime, why don't we just go after back rent rather than land claims?

I was the first generation of Indian kids to go to public school. I really liked it. I got European training. All my friends were non-Native; I grew up with them, I understood them, we got along. I played hockey in a municipal league with the children of the Richmond community; I didn't play on an Indian hockey team, though later in life I played for about two years for the Native B.C. all-star team. I have chosen to integrate freely as a person with my own will and in my own way, as a free human being.

I'm a very assimilated person, but not as Pierre Elliott Trudeau wanted me to be. I understand his dream. There's nothing wrong with assimilation; it's just a matter of a person choosing to do so in their own way, and I thing that's what Natives are saying. We don't have to be segregated anymore.

The Berlin Wall came down: why can't you take down the colonial reservations globally?

Lawrence Paul Yuxweluptun, graduated from the Emily Carr School of Art and Design in 1983 with an honours degree in painting. Yuxweluptun's strategy is to document and promote change in contemporary Indigenous history in large-scale paintings (from 54.2 x 34.7cm to 233.7 x 200.7cm), using Coast Salish cosmology, Northwest Coast formal design elements, and the Western landscape tradition. Yuxweluptun's work has been included in numerous international group and solo exhibitions, such as INDIGENA: Contemporary Native Perspectives in 1992. He was the recipient of the Vancouver Institute for the Visual Arts (VIVA) award in 1998.

The publication Neo-Native Drawings and Other Works documents and expands Lawrence Paul Yuxweluptun's exhibition-of the same name-that was held at the Contemporary Art Gallery in Vancouver, March 19 to May 16, 2010. This 40-page softcover book is illustrated by thirty-nine drawings, and with texts by Yuxweluptun ("Drawing"); artist, writer and MFA student Peter Morin ("Storytelling: Articulating Ancient Pathways"); and curator Petra Watson ("An Insurgent Act of Cultural Translation"). The exhibition included over 60 drawings spanning a time period of three decades. These drawings, many which serve as preliminary studies for paintings, are an important body of work through which to examine his process and gain insight into his oeuvre as a whole. This book was supported by: The Audain Foundation, The Michael O'Brian Family Foundation, Joe Development, Maryon and Jack Adelaar, Malinka Financial, Denbigh Design Fine Art Services, and a private donation.

To commemorate forty years of making highly political and polemical art, Lawrence Paul Yuxweluptun, an artist of Cowichan and Okanagan descent, had a retrospective show at UBC's Museum of Anthropology (May 10 to October 16, 2016) and, to accompany the exhibition of more than 60 works, a new book with the same title: Lawrence Paul Yuxweluptun: Unceded Territories (Figure1 $45).

Whether dealing with topics like aboriginal rights, land claims, missing and murdered women, or environmental degradation, Yuxweluptun has plenty to say. Politics and black humor are cornerstones of his art. His paintings have titles like Red Man Watching White Man Trying to Fix Hole in the Sky, The Impending Nisga'a' Deal. Last Stand. Chump Change, and Christy Clark and the Kinder Morgan Go Go Girls. This retrospective includes commentary from Michael Turner, Lucy Lippard, Marcia Crosby, Glenn Alteen and a short-story by Jimmy Durham, plus dialogue with curators Karen Duffek and Tania Willard.