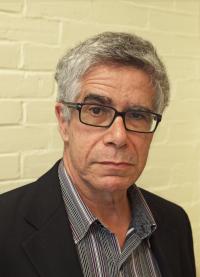 
A founding member of the Playwrights Guild of Canada and Vancouver's Playwrights Theatre Centre, John Lazarus has been one of Canada's most-produced playwrights. His first play, Babel Rap, was for years the most frequently produced play in Canada, and his play Dreaming and Dueling was the first Canadian play produced by the Shaw Festival. Dreaming and Duelling (co-written with Joa Lazarus) was anthologized in 20 Years at Play. Babel Rap was included in Six Canadian Plays.

Homework & Curtains is available from Playwrights Press. His other work for both adults and children includes The Late Blumer, Village of Idiots, Genuine Fakes, David for Queen, Medea's Disgust, Guilty Secrets, The Trials of Eddy Haymour, Medea's Disgust, The Nightingale, Rough Magic and Meltdown. In 2009, he was working on a new play, Trouble on Dibble Street, on a commission. His plays for young audiences were published as an anthology by Playwrights Press as Not So Dumb.

The Grandkid (Playwrights Canada 2014) by John Lazarus was produced at Gateway Theatre in Richmond in 2014. It's the story of Julius Rothstein and his granddaughter Abby who have lived at opposite ends of Canada since Abby was born. Abby moves in with her newly-widowed grandfather Julius when she is accepted into university. Their loving relationship becomes complicated by their age gap when they discuss subjects such as sex, politics and religion. $16.95 9781770912045

John Lazarus was born in Montreal in 1947. He graduated from the National Theatre School of Canada in 1969 and came to Vancouver in 1970. During his thirty years on the West Coast as an actor, critic, broadcaster, playwright, screenwriter and teacher, he taught Playwriting and Solo Show Technique at the Studio 58, and Screenwriting at Vancouver Film School. In 2000 he moved to Ontario to join the Queen's University's Drama Department faculty. He has also taught occasionally at the National Theatre School of Canada. Early in his career he appeared in the film Skip Tracer. He has also worked frequently as a dramaturge and adjudicator. In 2003, he directed a Queen's Drama Department production of Swollen Tongues by Kathleen Oliver. Lazarus's work has won the World Gold Medal for Children's Radio Drama, a Floyd Chalmers Award and several Jessie Richardson Awards for Vancouver productions.