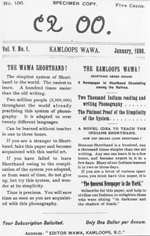 
Jean-Marie Raphael Le Jeune (1855-1930) is the namesake for the lakeside resort community of Lac Le Jeune located 35 kilometres south of Kamloops. He was an Oblate missionary stationed at Kamloops and Williams Lake who was also the author of Chinook Rudiments (Kamloops: Oblates of Mary Immaculate, 1924) and several other instructional works. Charles Lillard and Terry Glavin's A Voice Great Within Us dispels the myth that Chinook was 'invented' by Father Jean-Marie Le Jeune, but credits him as possibly Chinook's most influential progenitor. Le Jeune published a mimeographed Chinook newsletter, the Kamloops Wawa, that described itself as "the queerest newspaper in the world."; First published on May 2, 1891, the Wawa was 'Indian news' printed in both the English alphabet and a bizarre form of shorthand developed in 1867 by two French clerics, the Duploye brothers. Thanks to the Wawa's wide circulation, many Native and non-Natives in the B.C. Interior became literate as Duployan readers. Le Jeune had learned Duployan shorthand as a boy. He didn't realize it could be transferrable to his followers until an Indian cripple named Charley-Alexis Mayoos from the Lower Nicola noticed some of its use among Le Jeune's personal notes and immediately grasped its fundamentals. He, in turn, began spreading the 'phonography' to members of the Coldwater Indian band. Le Jeune consequently published several issues of the Kamloops Phonographer to help teach the Duployan writing system. Unable to gain any assistance from individuals or the church hierarchy, Le Jeune published his last issue of the Kamloops Wawa in September of 1904.

Practical Chinook vocabulary: comprising all & the only usual words of that wonderful language arranged in a most advantageous order for the speedily learning of the same, after the plan of Right Rev. Bishop Durieu O M.I., the most experienced missionary & Chinook speaker in British Columbia. (Kamloops: St. Louis' Mission, 1886)

Chinook vocabulary, Chinook-English: from the original of Rt. Rev. Bishop Durieu, O.M.I., with the Chinook words in phonography. (Kamloops, 1892) With Paul Durieu.

Chinook and shorthand rudiments: with which the Chinook jargon and the Wawa shorthand can be mastered without a teacher in a few hours. (Kamloops, 1898).

Prayers Before and After Holy Communion in Several Languages of the Natives of British Columbia (Kamloops: 1925. Also printed in Belgium.) Text in Latin, French, English, Chinook Duployan shorthand, Shuswap, Okanagan.