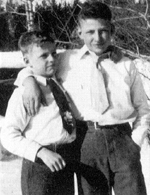 
Born in California in 1924, Todd Lee came to Canada in 1929 and grew up in Williams Lake in the days when the town had streetlights on only two streets and one neon sign above Tyson's Drug Store. "It was more exciting than March in a backwoods pasture," he recalled. A former minister and probation officer, Todd Lee wrote more than 400 children's stories as well as The Snoring Log Mystery: Wilderness Adventures of a Young Naturalist (Polestar 1993) based on his boyhood growing up near Williams Lake. Its sequel is The Twilight Marsh: And Other Wilderness Adventures (Polestar, 1995). Lee also published He Saw With Other Eyes: Stories from the Cariboo (Caitlin, 1992). He became a United Church minister in Prince George and Director of Corrections for the Elizabeth Fry Society. A pilot with his own plane, he has lived mainly in Prince George in his retirement. His older brother Eldon published several books and they co-wrote Tall in the Saddle: Ranch Life in the Cariboo (Heritage House, 1995).