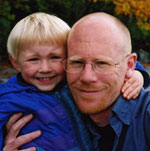 
Stephen Legault, a political and social activist residing in Victoria, interpreted the Tao te Ching in relation to activism and leadership in modern times in Carry Tiger to Mountain: The Tao of Activism and Leadership (Arsenal, 2006).

Having launched Highwater Mark Strategy and Communications in 2005 to support ethically driven business, Stephen Legault has used his experiences in the wilderness of both nature and politics to launch a mystery series with The Cardinal Divide (NeWest, 2008 ), set in Alberta's Cardinal Divide. The down-on-his-luck protagonist Cole Blackwater, a former politico from Ottawa's environmental movement,now divorced as a single Dad, accepts a contract to help stop a mining project. Trouble is, when the head of the mining initiative is murdered, Blackwater must save himself as a suspect before he can conserve the Cardinal Divide.

In End of the Line (Touchwood, 2011) newly reinstated Mountie Durrant Wallace arrives in a lawless shantytown to solve the murder of a CPR section boss before the killer can strike again. According to novelist Angie Abdou: "The End of the Line transported me. This explosive tale takes readers on a rough and tumble ride through Canada's Wild West. I completely lost myself in Stephen Legault's imagined world-what more could a reader ask for?";

Homelessness in the Downtown Eastside is the lightning rod for intrigue and murder for the third volume in Legault's mystery series featuring former ex-Ottawa politico Cole Blackwater. In The Vanishing Track (Touchwood, 2012) he helps his friend Denman Scott thwart the demolition of the Lucky Strike Hotel, home to nearly three hundred poor people. When he discovers homeless people are disappearing without a trace--hence the title--the pair uncover corruption with the help of an intrepid Vancouver Sun reporter and street nurse named Juliet Rose.

The fourth Cole Blackwater mystery, The Glacier Gallows (Touchwood 2014), begins with the murder of his business partner and former rival. The race is on to discover the murderer as Blackwater himself comes under police suspicion.

According to publicity materials:

"The Slickrock Paradox (Touchwood, 2012) is the first book in the Red Rock Canyon Mysteries, a series of books that explores an iconic American landscape through an atypical anti-hero who is deeply flawed, reluctant, and yet familiar.

Silas Pearson is looking for answers. It's been more than three years since his wife, Penelope de Silva, disappeared while working on a conservation project in Utah's red rock wilderness. Law enforcement authorities have given up hope of finding the adventurous Penelope alive. And some suggest that she may not have vanished into the desert at all, but simply left Silas for another man. Silas moves to Moab, where his wife was last seen, with one purpose: finding his wife, dead or alive. His search takes him into a spectacular wilderness of red rock canyons, soaring mesas, and vertical earth, where he must confront his failures as a husband and his guilt over not being there when Penelope needed him most."

Articles: 1 Article for this author
The Darkening Archipelago
Press Release (2010)


The second novel in the Cole Blackwater mystery series begins with the disillusioned, down-at-heel environmental consultant learning that his good friend and former client Archie Ravenwing is presumed dead in the shadowy depths of British Columbia's Broughton Archipelago. Days before his disappearance, Ravenwing was on the brink of unravelling a corporate conspiracy surrounding an outbreak of sea lice that could decimate the wild salmon population along the BC coastline. Now Blackwater must race against time to save an innocent life and a wild ecosystem on the brink of collapse. Inspired by his own work as an activist as well as the catastrophic real-life decline of BC's wild salmon run (currently the subject of a judicial inquiry), Stephen Legault has followed up The Cardinal Divide with a story that takes Cole Blackwater into perilous new territory, both personally and professionally.

"Legault writes with vivid imagery and knowledge. He perfectly describes the place I love most on earth. This is storytelling at its best."; -Alexandra Morton (biologist, wild salmon activist)
NeWest Press