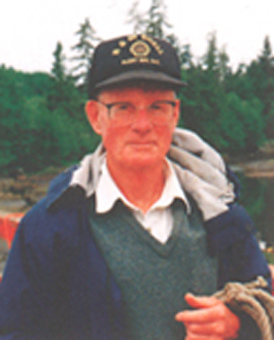 
Dr. Kenneth Macrae Leighton, former head of anaesthesia at the University of British Columbia Hospital, was born in 1925 in Barbados but grew up and took his medical training in Scotland. He practised medicine in many countries around the world and in a number of communities in British Columbia. In the early 1990s, at age 66, he rowed a hand-built jollyboat from Vancouver's Jericho Beach up B.C.'s west coast to Prince Rupert. Oar and Sail (Creekstone 1999) is his account of that trip. Dr. Leighton died in 1998.

[Other rowing feats: Betty Lowman Carey twice rowed by herself from Puget Sound to the Queen Charlotte Islands and described her first solo, two-month journey in 1937 in Bijaboji (Harbour, 2004). In the summer of 1983, her journey was emulated by retired couple Pete and Nancy Ashenfelter who rowed from Lopez Island, Washington all the way to Ketchikan, Alaska in a 17-foot open dory. Rowing between eight and 16 hours per day, they completed their 750-mile trip in two-and-a-half months. They published Row to Alaska: By Wind and Oar (New York: Anderson Publishing, 1994).]

Review of the author's work by BC Studies:
Oar and Sail: An Odyssey of the West Coast


Fresh out of Aberdeen University, Kenneth Macrae Leighton arrived at Alert Bay to begin a distinguished medical career in 1952. Smitten by the B.C. coastline, he resolved to one day explore it under his own steam, slowly.

From the launch of his boat to the launch of Leighton's book took most of the decade. Oar & Sail (Creekstone $16.95) is Leighton's account of his 850-kilometre adventure averaging two knots per hour. He stayed out of shipping lanes, bucked wind and tides, and mainly ate Japanese noodles, biscuits and Cream of Wheat.

"It's a long way to Alert Bay and twice as far to Prince Rupert,"; says Leighton, "but time and distance are not worth thinking about. The sun is coming out. I have no deadlines. It's great to be alive.";

Other mariners weren't sure what to make of the lone figure bent over the oars. Typically a cabin cruiser would pull up to make sure Leighton wasn't having a heart attack, then speed away again.

Full days of rowing left him 'knackered' but in good spirits. He could always dig into his 'emergency only' parcel supplied by a friend. It contained his favourite Royal Navy chocolate, sardines and "joy upon joy, a bottle of Glenlivet malt whiskey no less, which has been known to raise the dead on more than one occasion, or so I have been told.";

Leighton points out landmarks and provides historical notes behind the place names such as Broughton, Johnstone and Chatham. In Surge Narrows the good doctor gets the scare of his life, becoming trapped in a whirlpool for five frightening hours. This teaches him to scrutinize his charts and tide tables with extra rigour.

Sometimes during his first voyage our not-so-ancient mariner pushed himself too hard, always in the grip of determination to reach the next beckoning island. "I have few regrets... but, as I write, I can see a constant error threading its way throughout. The goal appears to have been everything. This is foolish and very short-sighted...I must live with my mistake.";

Leighton heeded his own counsel on the second journey and took more time for new friendships on the water, accepting a tow when badly needed or a bag of freshly baked oatmeal cookies. With calloused hands and Gaelic wit, he propelled Morag Anne all the way to Prince Rupert's harbour. At UBC Hospital, Ken Leighton died suddenly in June, 1998 of complications related to hepatitis C; his lyrical narrative was published in November of 1999. Three months later it was reprinted. 0-9684043-1-6