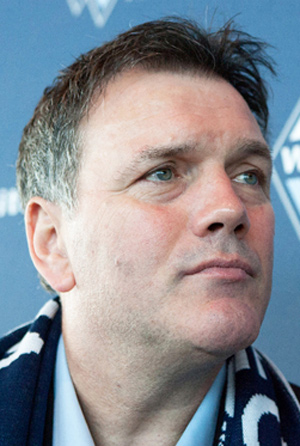 
Bob Lenarduzzi, as president of Vancouver Whitecaps FC, published an autobiography Bob Lenarduzzi: A Canadian Soccer Story (Harbour 2011),co-written with veteran sportswriter Jim Taylor. It ranges from Lenarduzzi playing pick-up games with his brothers at Callister Park in East Vancouver, to playing professional soccer with Reading FC in England, to his early career with the Vancouver Whitecaps and the team's heady 1979 victory when they won the North American Soccer League Soccer Bowl championship. He also remembers what it was like to play on the first Canadian team to make it to a FIFA World Cup final and describes his experiences as a coach and player for the Vancouver '86ers.

Jim Taylor first met Lenarduzzi when he was nineteen. He accompanied Canada's National soccer team, including Lenarduzzi, during their World Cup bids.

Review of the author's work by BC Studies:
Bob Lenarduzzi: A Canadian Soccer Story


If you discount Whitecaps co-owner Steve Nash of NBA fame-who grew up playing soccer in Victoria and would dearly love to have played professionally with his brother, Martin Nash-there is only one soccer folk hero in B.C.

Arguably it should be John Catliff, the Vancouver-born striker who has scored the second-most goals for Canada's national team, or it should be prolific scorer Christine Sinclair, who is leading the Canadian women into the London Olympics, but the household soccer name for decades remains Bobby Lenarduzzi, current president of Vancouver Whitecaps FC.

Co-written with veteran sportswriter Jim Taylor, who accompanied Lenarduzzi, his brother Sam Lenarduzzi and the rest of Canada's national men's team to their only World Cup appearance, Bob Lenarduzzi: A Canadian Soccer Story (Harbour $28.95) ranges from:

â?˘ Lenarduzzi serving as a ball-boy during raucous matches at Callister Park in East Vancouver
â?˘ his character-building apprenticeship at age fourteen with Reading FC in England
â?˘ the Whitecaps' heady 1979 championship of the North American Soccer League after which some 100,000 Vancouverites attended a victory parade
â?˘ his experiences as a coach and player for the Vancouver 86ers.

It's seldom noted that Lenarduzzi's 86ers won four straight Canadian Soccer League titles and amassed a 46-game unbeaten streak, a record for any professional team in North America.
The wryness of Taylor is evident in much of the text: Nobody saw Canada lose its final game at its first-ever World Cup appearance because the live broadcast was pre-empted. By Sesame Street.

Lenarduzzi describes the ancient Elm Park stadium at Reading: "It's said that once in your place it was impossible to squeeze down the line to get out to the loo or your place would be lost. So, it's said, you peed in the pocket of the man next to you. 'Liverpool hot pocket,' it came to be called... Folkore, no doubt. One can only hope.";

This memoir is far from a 'tell-all' page-turner, opening as it does with a chapter of appreciation for current Whitecaps majority owner Greg Kerfoot, but there are some lively bits and some beguiling humility.