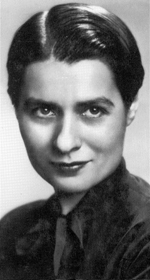 
S.P. "Sunny" Lewis was a radio news reporter in 1987 when she first met Grace MacInnis, daughter of CCF co-founder J.S. Woodsworth. She was so impressed that she went back for another visit, and another. During the last few years of MacInnis's life, the two women spent many a long afternoon together while Lewis worked on the biograpy Grace: The Life of Grace MacInnis (Harbour, 1993). Married to Angus MacInnis, Grace MacInnis was CCF party and caucus secretary until 1941. She became provincial president of the CCF in 1958. Following the death of her husband she served for nine years as the MP for Vancouver-Kingsway, specifically concerned with housing and the status of women. Another MacInnes biography is Grace MacInnis: The Story of Her Love and Integrity by Ann Farrell. Born in 1905, Grace MacInnis died in 1991. Her private papers are stored at UBC Special Collections, along with those of her husband who was born in 1884 and died in 1964.

Sunny Lewis was born and raised in New York City and travelled extensively before settling in Vancouver in 1970. She was part of the contingent of women who once occupied the offices of the Georgia Straight to produce an "women only" issue. From then until 1992, she produced programs for CBC, CFUN and CKNW radio, and wrote and edited articles for the Vancouver Sun, the Globe and Mail, Maclean's and other publications. In 1989, she founded the Environment News Service (ENS), which now has more than 100 correspondents throughout the world. She makes her home in Honolulu with her husband and ENS business partner Jim Crabtree. With Sidney Morozoff she also co-authored Table Talk: Mosaic's Guide to Greater Vancouver's International Restaurants.