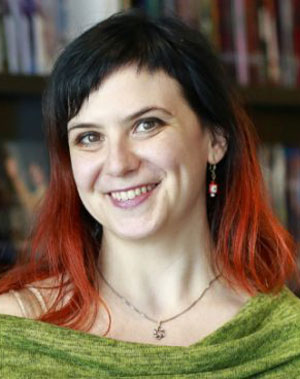 
Graphic novelist and comic artist Miriam Libicki has been named Vancouver Public Library's 2017 writer in residence. "I'm thrilled to be taking on this new role and creating opportunities for more people to discover the world of graphic novels," says Libicki. "This is a great way to mentor writers who may not currently be part of the comics community, and encourage those who have family stories or burning passions to share - to tell those stories through images."

Miriam Libicki was born in Columbus, Ohio. After living in Jerusalem and Seattle, Washington, she is now based in Vancouver. She completed her Bachelor's of Fine Arts from Emily Carr Institute in 2006.

She has been cartooning since 2003, and screenprinting since 2005. Her primary themes are culture clash and the construction of identity, usually through the prism of her Jewishness and dual American-Israeli citizenship.

Libicki illustrates her real life experiences and incorporates documentary techniques such as interviews and photo references. She also does cartooning workshops and works as a teacher at Emily Carr University.

Libicki is the creator of the autobiographical comic series, jobnik!, which has run from 2005 to the present, and recounts her service in the Israeli army during the second Intifada. Her other nonfiction comics have been published by Rutgers University Press, Alternate History Comics, the Ilanot Review, and Cleaver Magazine.

Toward a Hot Jew her collection of graphic essays exploring what it means to be Jewish was named one of 2016's top 10 graphic novels by Forbes. The book investigates what it means globally and culturally to be Jewish, dating from her time in the Israeli military to her tenure as an art professor. Toward a Hot Jew shows Miriam Libicki as a powerful witness to history in the tradition of Martjane Satrapi and Joe Sacco.

Miriam Libicki, the Vancouver Public Library's new Writer In Residence has won a $10,000 Vine Award for Jewish Literature for her non-fiction graphic novel, Toward a Hot Jew (Fantagraphics Books, 2016).

Toward a Hot Jew (Fantagrapghics 2016)
Jobnik!
The Jewish Comix Anthology
A Bunch of Jews (and other stuff), anthology
The Jewish Graphic Novel: Critical Approaches, anthology