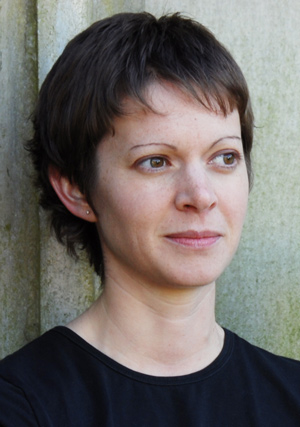 
In 2014, Ashley Little won both the Ethel Wilson Fiction Prize for Anatomy of a Girl Gang (Arsenal Pulp Press) and the Shelia A. Egoff Children's Prize for her young adult novel, The New Normal (Orca Book Publishers). In thirty years, nobody else had ever had this 'double-double,' winning two B.C. Book Prizes with two different titles in the same year. In her acceptance speeches, Little acknowledged David Chariandy for encouraging her to write Anatomy of a Girl Gang and Lynn Coady for encouraging her to turn a short story into a novel for The New Normal.

Five young women commit ATM robberies, cook crack and survive on the mean streets of Vancouver in Ashley Little's Anatomy of a Girl Gang (Arsenal $16.95), a novel about a young girl gang in Vancouver called the Black Roses. Z is a graffiti artist; Kayos gave birth to a daughter at age thirteen, Mac is the mastermind, Mercy is a Punjabi thief and Sly Girl has fled her First Nations reserve. In the same year, Little published a YA novel, The New Normal (Orca $12.95), about a tenacious teenager who copes with losing her hair following the deaths of her sisters. Her novel Niagara Hotel (Arsenal Pulp 2016) was shortlisted for the 2017 Ethel Wilson Ficton Prize.

Tofino-raised Little completed a BFA in Creative Writing and Film Studies at The University of Victoria and released her first novel, Prick: Confessions of a Tattoo Artist (Tightrope Books, 2011) before moving to Alberta. Little's previous writing appeared in Broken Pencil, The Danforth Review, Room, and the anthology, Writing Without Direction: Ten and a Half Short Stories by Canadian Authors Under Thirty.


Synopsis according to the author's website: "Meet twenty-one year old Anthony "Ant"; Young: an artist, an asshole, an anti-hero. After fleeing a violent home life in Calgary, Ant moves to Victoria, BC, where he earns his tattooing apprenticeship under Hank the Tank, a founding member of the powerful Lucifer's Choice motorcycle gang. Under Hank's guidance, Ant learns the craft and business of tattoo, but he is also exposed to a vicious and frightening criminal underworld. Written in intense, rapid-fire bursts, PRICK explores themes of addiction, desire, and remorse. As Ant's life spirals out of control, he struggles to hold on to the one thing he really cares about in this unforgettable, disturbing, and darkly funny tale."


Eleven-year-old Tucker Malone, the hero of Ashley Little's Niagara Motel is a late twentieth century descendent of Huckleberry Finn through Holden Caulfield. His story is set in the early 1990s, when television had not yet yielded its power over the imagination of the young to the internet and smart phones.

Tucker's mother is a stripper and sex worker. These jobs, on which their livelihood depends, are complicated by her disability-narcolepsy with cataplexy. The two are forced to move constantly from place to place and from one motel to another. In this unstable life, the long-running television sitcom, Cheers, fills a vacuum, exerting over Tucker the seductive power of a religion.

Tucker's yearning for his absent father, about whom he knows nothing, is so strong that it overcomes his rational intelligence. He believes that Sam Malone, the owner of the Cheers bar in Boston, is his father, a belief that is strengthened by the coincidence of their shared name.
Tucker and his mother find a temporary home in a motel in Niagara Falls until her narcolepsy causes a serious accident. She falls asleep on the highway, gets hit by a car, and ends up in intensive care. Tucker is sent to a group home for delinquents and kids without parents. When a violent incident makes the place unbearable, he escapes, setting out on a search for his imagined father, Sam Malone.

The companion on his journey is Meredith, a sixteen-year-old sex worker who is pregnant. From this point on, Niagara Motel turns into an odyssey across the entire American continent.

First they drive to the Cheers bar in Boston and then, after learning that the show was actually filmed in Hollywood, they head west in a futile search for Sam Malone or the actor who played him.

When their stolen car breaks down, they hitchhike, a means of travel that brings them into contact with a range of quirky and sinister Americans, some of them actual characters from the 1990s. The latter include Timothy, a man with 200 guns in his vehicle, who invokes the 2nd Amendment of the Constitution and rails against the U.S. government. He can't believe that Tucker doesn't know how to handle a gun and undertakes to teach him.
Tucker, afraid to cross Timothy, goes along with the lesson, hits a target, and finds the experience surprisingly exhilarating.

Timothy is on his way to Oklahoma City. When Tucker asks why he is going there, the man replies, "I could tell you. But then I'd have to kill you.";

At the other end of the spectrum are two benign hippies, so upset by accidentally running over a rabbit that they involve Tucker and Meredith in a ritual burial of the creature. They also introduce Tucker to pot smoking.
Other drivers include Relvis, an Elvis impersonator, a gasoline-sniffing evangelical, a transgender woman, a Goth, and a transport truck driver. The model and colour of each car is carefully specified, and is an extension of its owner's personality.

Tucker's salient characteristic is his reluctance to judge others, a trait established early in the novel, when Meredith explains why she likes him:
"You're the only person who knows what I do and doesn't make me feel like a piece of shit for doing it. You're the only person who doesn't judge me,"; she said.
"Why would I judge you? It's just a job.";
"See, that's exactly what I'm talking about.";

The trip takes tucker and meredith through various American landmarks and places-Dodge City, the wild frontier towns of the Old West, Las Vegas and the Grand Canyon.

When they stand in awe looking down at the Grand Canyon, Meredith sees in the vast crater an image of the emptiness in her own heart. "I'm almost completely hollowed out,"; she says. Tucker is more sanguine. Even though terrible things have happened to him too, he counters with the image of Niagara Falls, seeing in the great cascade the restorative and healing properties of water: "I thought about how everyone has little Grand Canyons inside them but everyone has little Niagara Fallses too.";

An overriding theme of acceptance, of tolerance, of not judging by appearances, runs throughout Niagara Motel. When the spiked collar, black lipstick and fingernails of one driver make Tucker apprehensive, Meredith reassures him: "It's just a fashion. It's called Goth."; She muses that sometimes the weirdest looking people are the most normal and the normal looking people are the weirdest.";
The point is emphasized later in this novel when Tucker, back in Canada, accepts a ride from an attractive, normal couple. Their names are Paul and Karla.
The climactic scene of the novel is Tucker and Meredith's arrival in Los Angeles. It coincides disastrously with the start of the riots that erupted in Los Angeles in the spring of 1992 after three police officers were acquitted in the beating of Rodney King.
By the time the riots ended, fifty-five people had been killed and over 2,000 injured. When Tucker manages to escape from Los Angeles, the experience has propelled him into adulthood.

This review was written as the news was breaking of the shooting of five police officers in Dallas following the killing of two black men in Louisiana and Minnesota by white police officers. Fictions set in an earlier period often take on a contemporary relevance, either intentionally or fortuitously. Niagara Motel is no exception.

With its references to the Los Angeles riot and the Oklahoma City bombing, Niagara Motel provides a stark reminder of how little has changed in twenty-four years and of the ever simmering potential for violence.
In spite of all the harrowing events, the tone of Niagara Motel is far from dark. It is full of lively dialogue and humour, and evidence that nearly everyone has "little Niagara Fallses"; in them.