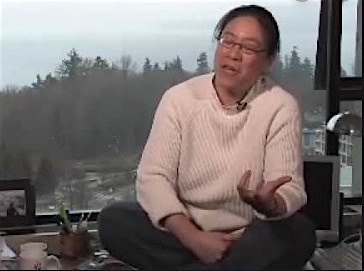 
As an SFU History professor, Tina Loo wrote the first comprehensive legal history of B.C. prior to confederation, Making Law, Order and Authority in British Columbia, 1821-1871. At the outset, control of the territory was exercised by First Nations and the Hudson's Bay Company. By 1871 the British Colonial government was firmly in place. Loo has also examined law and moral regulation in Canada from 1867 to 1939 in Making Good (University of Toronto Press 1997 $12.95), co-authored with Carolyn Strange. She is also the author of True Crime, True North: The Golden Age of Canadian Pulp Magazines (Vancouver: Raincoast Books, 2004). In 2006, Loo wrote States of Nature: Conserving Canada's Wildlife in the Twentieth Century (UBC Press). Later Tina Loo wrote Moved by the State: Forced Relocation and Making a Good Life in Postwar Canada. (Brenda and David McLean Canadian Studies.) Vancouver, BC: UBC Press, 2019. 208 pages. 9780774861007 (hc) $89.95

Moved by the State: Forced Relocation and Making a Good Life in Postwar Canada† by Tina Loo

Moved by the State is a comparative history of forced relocation and development in five regions in Canada from the 1950s to the 1970s. In some ways, this book is a departure from Tina Loo?s previous body of published work, which has focused primarily on the natural environment. However, there is a clear continuation of a theme. In this new work, as with her previous studies of wildlife conservation and hydroelectric development, Loo?s interest is in the motivations and actions of government officials, experts, bureaucrats, and professionals who have shaped our current understandings and experiences of place. Moved by the State is organized into five chapters, each of which covers one region where the state imposed forced relocation to address poverty during the postwar era ? the central Arctic, outport Newfoundland, Eastern Quebec, Africville in Halifax, and Vancouver?s East Side. Such an ambitious project could more easily be presented as a collection of essays. But Loo has skillfully created a cohesive story here, by identifying connections, similarities, and differences that reveal the broader intentions of, and influences on, the technocrats who planned and implemented these relocations.

Individual instances of postwar relocation have generated, to varying degrees, historiographies of their own, as well as popular culture in the form of literature, music, and poetry. Most of this material has been locally produced, from within communities that were ?lost? and with a focus on the experiences of the individuals who were the targets of forced relocation. In these narratives, postwar forced relocation and development was a tragedy, in which residents were hard done by, and the state looms large as the enemy.

The story Loo tells is a different one. Loo acknowledges that forced relocation was a disciplinary strategy used by a technocratic state, but shows that a key part of that disciplinary process was the creation of participatory citizens. Participatory democracy promised citizen empowerment and a just society, ideals of the postwar era. This was about creating the capacity within individuals and communities for self determination, self sufficiency, and independence ? all qualities thought necessary to live ?a good life? in Canada. As such, citizens who were the targets of relocation were able, to varying degrees, to play a role in directing the process of relocation. At the same time, Loo asserts that participatory citizenship was also a way for the state to reinforce existing hierarchies and structures of power by allowing some dissent and opposition, but only within existing structures of governance. Whereas many historical accounts of these events have homogenized the state, Loo humanizes the state by bringing to the forefront the individuals who were the bureaucracy. In doing so, she complicates the simple dichotomy of victim and aggressor that has characterized previous interpretations of postwar relocation, instead offering an historical account that is rife with subtleties, contradictions, and insight.

The first three chapters in Moved by the State look at development and relocation in rural areas ? the North, outport Newfoundland, and the Gaspť and Lower St. Lawrence region of Quebec. These chapters provide a sharp contrast to the final two chapters, which examine urban renewal projects in Halifax and Vancouver. In each of these cases, Loo notes that conditions of poverty (ironically, conditions created by the state) provided an entry point for state intervention and a justification for relocation and development.

In the Keewatin region in what is now Nunavut, relocation first occurred as a coercive and careless operation that led to the death by starvation of thirty-three Inuit in the winter of 1957-58. In a postwar culture that emphasized modernization and humanitarianism, a sentiment which further intensified in the 1960s, this incident compelled the federal government to turn attention and resources to developing the North (and other regions) in a way that considered the needs of the people living there. In the 1960s and 70s, experts similarly identified conditions in outport Newfoundland and eastern Quebec as impoverished and unable to meet the cost of basic social services, and embarked on forced relocations and development strategies that met with passionate resistance.

For Loo, what is important is how the process of forced relocation occurred as an interplay between the state and the people. She uses Foucault?s notions of governmentality to frame her complex and multilayered interpretation of history. Many individuals who worked for the state ? academics, government officials, social workers ? were driven by humanitarian ideals and an honest interest in the well being of the populations targeted for relocation. Citizens were thus able to participate in and guide the process of relocation to varying degrees, sometimes through resistance and other times invited and encouraged by the state. But people had to be politicized before they could participate. In rural areas, relocation and development involved the creation of engaged citizens with a sense of connection and responsibility to the state, where previously in these isolated communities, social ties based on family, necessity, and proximity had prevailed. The creation of political subjects, according to Loo, was a form of discipline that served to reinforce the power of the state, where participatory citizenship allowed for opposition that did not threaten existing structures of power. For example, in Newfoundland, outport residents managed to access government funding to move to places of their own choosing rather than to locations that the state had chosen, which enabled them to preserve community cohesion and their ?way of life.? Regardless, the process of relocation required a significant amount of consultation, engagement and compromise. These were actions that created a community of participatory citizens with the means to some degree of self-determination, while simultaneously embedding the community within liberal and capitalist institutions.

In urban areas, relocation occurred under the broader undertaking of urban renewal, and involved not only provincial and federal levels of government, but also municipal. In cities, community organization and cohesion already existed in the neighbourhoods targeted for relocation, although to varying degrees. Here, the focus of the state was on the best use of municipal lands as much as it was in addressing urban poverty and blight. As in rural regions, Africville in Halifax and Vancouver?s East Side were first constructed as ?problems? to provide an entry point for the state to begin its efforts to modernize, address urban poverty, and expropriate lands. Race and ethnicity clearly played a role in these two situations, with a predominant African Nova Scotian community in Africville and a significant Chinese population in the East Side. In Loo?s analysis of these two situations she focuses on how ideas of race in the 1960s and 70s shaped the approach government officials and experts. The politicization of racialized communities and widespread activism, along with a general tendency towards humanitarianism and social justice in this period meant that many of the planners, engineers, and social workers involved advocated for consultation with residents, consideration of community and culture, and fair compensation for their losses.

Loo demonstrates how each story of relocation is unique, shaped by the individuals involved as well as the particular social, environmental, and economic contexts at play. One of her main themes is the role and nature of citizen participation, which was in large part determined by how individual technocrats engaged with and responded to citizens. Her chapter on Vancouver?s East Side offers an interpretation of one instance of forced relocation in which participatory citizenship was particularly effective, especially for a population marginalized by multiple layers of poverty and racism. While the residents of Africville were not able to halt the razing of Africville or their subsequent integration and dispersal into public housing, the residents of Strathcona in Vancouver?s East Side were more successful in their resistance. Loo attributes this to a cultural shift in the late 1960s that influenced policy makers to become more critical of urban renewal projects and to pay more attention to grassroots activism, as well as the strength of Chinese Canadian organizations, chiefly the Strathcona Property Owners and Tenants Association (SPOTA). In this case, citizen participation led to a shift in the state?s approach to urban renewal, from forced relocation to neighbourhood rehabilitation in consultation with SPOTA.

The trauma of forced relocation that has been memorialized and romanticized in popular culture and regional history is important, but has served to obscure the nuances of how the state perceived and attempted to address poverty and racism in the postwar period. In her conclusion, Loo points to a sense of hopefulness that pervaded the postwar decades, with its ideals of liberalism, humanitarianism, and participatory democracy. Loo is clear that relocation policy was often based on misconceptions or a lack of information, and fundamentally served the interest of the state to move towards modernization and a liberal social order. But Moved by the State also reveals the essentially good willed intentions and motivations of the individuals responsible for planning and implementing relocation, and their optimistic belief in the power of the state to enable all Canadians to pursue ?a good life.? Loo?s contribution is seminal, and is a masterfully crafted work of academic history.

Also see review of the author's work by BC Studies:
Making Law, Order, and Authority in British Columbia, 1821-1871