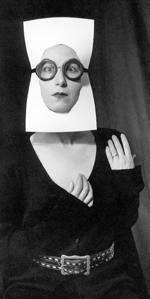 
As the director and former director of Presentation House Gallery in North Vancouver, Love has curated numerous exhibits that have become the basis for collaborative books such as Faith Moosang's First Son: Portraits by C.C. Hoy [See Moosang entry] and Facing History: Portraits from Vancouver (Arsenal 2002 $29.95). The latter collection of 120 photographs, with essays, reflects the city's cultural history. Sporting a camel hair coat and matching gloves in 1970, Vancouver Art Gallery senior curator Doris Shadbolt is one of the few 'famous' or influential figures to be featured. "The Gallery was so alive then,"; recalls Doris Shadbolt. "When we opened a show like New York 13, there would be line-ups all the way down the block to get in. Art was moving so fast then, and we were a part of it. We were in the lane that was moving."; Her husband, Jack Shadbolt, became the best-known painter of the West Coast--after Emily Carr. He had 21 exhibits at the Vancouver Art Gallery over a 62-year-period, about one VAG show every three years. Contributor Sarah Milroy describes the Doris Shadbolt portrait in Facing. "She knows exactly where she is heading. It is we who will have to wait to find out the destination... If the car was sharp, the driver was more so, and in the sweep of her estimable career, 1970 was a particularly banner year... She was also preparing for the centennial exhibition of Emily Carr, an exhibition that would mark her first in-depth, scholarly encounter with the British Columbia modernist."; Far more obscure is performance-artist Natalie Brettschneider, born in New Westminster in 1896 and arguably the first 'avant-garde' artist from B.C. A beautiful and talented singer, she won a scholarship to study in Paris in 1913. "As a provision of her scholarship,"; says contributor Carol Sawyer, "she did product demonstrations of antiseptic throat gargle every Saturday afternoon in the basement of the Semaritaine department store. These events soon attracted a cult following among the Parisian avant-garde, many of whom became life-long friends and collaborators."; Upon her return to the United States during World War II, she pursued a career as a jazz singer until she was blacklisted as a suspected communist sympathizer in the 1950s. She returned to Canada and spent her final years in Point Roberts. She died in 1986. With material ranging from historical images to contemporary visual artists' work, Facing History provides a glimpse into Vancouver's sense of itself. Other writers who comment on the images are Robin Blaser, Colin Browne, Wayde Compton, Tom Cone, Bruce Grenville, Brian Jungen, Laiwan, Roy Miki, Marina Roy, Henry Tsang, Michael Turner, Betsy Warland and Rita Wong. (1-55152-127-X).

Review of the author's work by BC Studies:
Facing History: Portraits from Vancouver