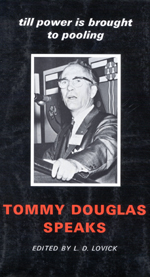 
"Every single one of us can make our difference felt in the little corner where we live." -- Tommy Douglas

It was never a bestseller. But if Tommy Douglas really is the greatest Canadian, as determined by a national 2004 CBC poll, surely Tommy Douglas Speaks: Till Power is Brought to Pooling (1979), edited by L.D. (Dale) Lovick, qualifies as a literary benchmark in the realm of B.C. books by politicians. It contains full texts or excerpts from 35 speeches spanning Douglas' 42-year political career.

Lovick was a professor of English and Canadian Studies at Malaspina College when he edited this B.C.-published collection of speeches. He cites Douglas' valiant denunciations of the War Measures Act ("his finest hour";), the sell-off of Canada's oil and gas, and the Columbia River Treaty.

Lovick describes Douglas as a classic liberal because "he believes that human beings are created good and are corrupted by the society and environment they inhabit."; Some of the quotations from Douglas reveal his sparkling wit. "When a Yankee trader tells you that you are a tough negotiator,"; he said, "you know you have been taken to the cleaners.";

Born in Vancouver, Lovick gained Master's degrees from the University of British Columbia and Carleton University. As a professor of English and Canadian Studies at Malaspina College, he edited a collection of speeches by former federal NDP leader Tommy Douglas entitled Tommy Douglas Speaks: Till Power is Brought to Pooling (Oolichan Books, 1979). It contains full texts or excerpts from 35 speeches spanning Douglas' 42-year political career. According to Lovick, Tommy Douglas was a classic liberal because "he believes that human beings are created good and are corrupted by the society and environment they inhabit." Lovick cites Douglas' valiant denunciations of the War Measures Act ("his finest hour"), the selling off Canada's oil and gas, and the Columbia River Treaty. Some of the quotations from Douglas reveal his sparkling wit. "When a Yankee trader tells you that you are a tough negotiator," he once said, "you know you have been taken to the cleaners." He also observed, "[My grandmother] had such long and beautiful hair that her boast was that she could sit on her hair. Now I have a daughter who can't sit on her skirts. There is a generation gap."

In the beginning, for Tommy Douglas, there has always been The Word - a faith in his own ability to win political converts by proselytizing from a podium, rather than by propagandizing with ad campaigns. It is the conviction that speech can heal, teach, or enlighten which infuses Tommy Douglas Speaks with a sense of intellectual vitality so often missing from the speeches of more prominent, more Machiavellian politicians of our day.

Douglas said in 1958, "We believe that the measure of any community is the amount of social and economic security which it provides for even its humblest citizens." But like the majority of CCF/NDP rank and file members since the '40's, Tommy Douglas has never wholly embraced the Marxian precept that man's destiny is settled solely in the marketplace. The Baptist minister from Weyburn, Saskatchewan essentially believes that democratic socialism must emulate applied Christianity. Tommy Douglas Speaks documents the beliefs of a man who is not so much an anti-capitalist as a dedicated egalitarian, a public figure of speech and action, not rhetoric and reaction.

Self-deprecating humour has always been an essential facet of Douglas' practiced delivery, but his reputation as one of Canada's most accomplished political speakers is derived from much more than his sharp wit. His eloquence is due, to a large degree, to the fact that political pragmatism has always taken a back seat to his principles. Never one to sidestep an issue, Douglas was severely castigated as the devil incarnate for daring to make good an election promise to perpetrate the evil of socialized medicine in 1961. His implementation of the Saskatchewan Medical Care Insurance Act caused a strike by doctors and greatly contributed to his defeat in the federal election of 1962.

Douglas was one of the lone voices of dissent in 1970 when he analogized the imposition of the War Measures Act as comparable to "using a sledgehammer to crack a peanut."

I say that the government's action today is an action of panic....I predict that within six months, when the Canadian people have had time to reflect on what has happened today-the removal of all the protection and liberties presently on the statute books of Canada, a country placed under the War Measures Act, regulations introduced allowing persons to be detained for 90 days without a chance to prove their innocence when that day comes, the Canadian people will look on this as a black Friday for civil liberties in Canada.

Obviously not all readers will see fit to swallow the wisdoms of Tommy Douglas whole, but a taste of Tommy Douglas Speaks should prove palatable to Canadians of all political persuasions. Douglas' old-fashioned slickness and make no mistake about it, the speeches in this book are finely crafted indeed-is a refreshing tonic in an age when leaders with well-defined ideologies are often dismissed as zealots, when displays of emotion on the part of politicians are invariably interpreted as signs of weakness, and when the measure of a politician's intellect is seldom judged by the cogency of his or her opinions and arguments.

Oolichan Books' Ron Smith, a Malaspina College English professor, acquired Douglas' consent to do the book simply by approaching Douglas at a speaking engagement one evening and asking. Three years later, Smith presented Douglas with a copy of Tommy Douglas Speaks, and Douglas, an ex-printer, was impressed with the work of Victoria's Morriss Printers and by the attractively packaged Oolichan book which retails for only $13.95 and contains 16 photographs. Douglas held the book aloft and typically joked that few people would likely be interested in the verbal history of himself, whereupon publisher Smith promptly sold several dozen copies to the gathered NDP faithful.

Ron Smith's resolve to publish a non-literary title "that I could believe in" is coupled with a preference for independence. When he published The Stone Hammer Poems by Governor General's Award winner, Robert Kroetsch, he took 13 cartons of the title to Alberta and proceeded to follow Kroetsch to readings and conferences. This short promotional stint proved to Smith the veracity of Tommy Douglas' belief that there is no substitute for the immediacy of any one-to-one relationship.

Smith's friendship with Kroetsch, one of Canada's most critically acclaimed novelists, was integral to the formation of Oolichan Books in 1974. Kroetsch encouraged Smith to approach Malaspina College to respond to the need to establish another literary press outside of Vancouver. After Smith financed and self-printed his first two titles, he received Canada Council funding to produce works by Kroetsch and Robin Skelton. Oolichan Books now has no affiliation with Malaspina College.

"My commitment is primarily to publish West Coast writers, half of whom will be unknowns," says Smith. "But my tastes are pretty Catholic. I think it's a lot of nonsense when people subscribe to one poetic and ignore all others. That's why our list of books is as varied as it is. I hope to keep it that way."

Smith has already branched away from poetry to publish a children's novel, Journey to the Sun by Yves Troendle, and has another Troendle title for kids, Raven's Children, slated for publication later this year. Meantime, Tommy Douglas Speaks stands as an ideal example of the type of quality, non-literary title Smith hopes to publish once a year to help keep the wolf from Oolichan's ever-opening door.