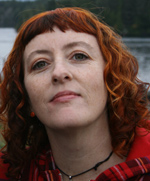 
On November 9, 2014, Christine Lowther was accorded the Rainy Coast Arts Award for Significant Accomplishment from the Pacific Rim Arts Society.

Daughter of poet Pat Lowther, self-described 'activist' Christine Lowther of Clayoquot Sound first wrote and published A Cabin in Clayoquot, a non-fiction book about collective resistance to clearcut logging in Clayoquot Sound, and later moved to live on a floathouse in Tofino.

Christine Lowther has written about her family background, and how the murder of her mother by her father affected her and her sister Beth, in a short essay called Gifts From Lands So Far Apart near the outset of her memoir Born Out Of This (Caitlin 2014). "My mother had read her poems at peace rallies while we each took our turn in her womb." The book also contains her reflections on the positive influence of punk rock and alternative music groups such as Mecca Normal over several decades in a piece called Generally Giving A Damn.

She is also the author of New Power and co-editor and co-author of Writing the West Coast: In Love with Place. A past columnist and 'zine producer, her work has been featured on CBC Radio and published in anthologies and periodicals including Wild Moments: Adventures with Animals in the North, The Fiddlehead, Risking for Change, Salt in Our Blood, The Beaver, Regina Weese, The Vancouver Sun, Poetry-in-Transit, subTerrain, Other Voices, The New Quarterly and Poetry is Dead.

Review of the author's work by BC Studies:
Living Artfully: Reflections from the Far West Coast
Writing the West Coast: In Love with Place
Born Out of This

Articles: 1 Article for this author
Writing the West Coast: In Love with Place
Review


In the anthology Writing the West Coast: In Love with Place (Ronsdale $24.95), educator Briony Penn notes her students have "a better understanding of sex toys in New York City than liverworts in Clayoquot Sound."; Kevin Drews recalls surviving cancer to make a triumphant return to surf at Chesterman Beach.

Searching for a western screech owl, Carolyn Redl recalls how a Good Samaritan helped her revive a dead battery near the Kennedy Lake Bridge.

With its collective, eco-consciousness coupled with contributions from First Nations writers, Writing the West Coast is a coherent anthology that reverberates with a sense of history and pride. It amounts to a regrouping of the spirits that enabled the inhabitants of Clayoquot Sound to join with thousands of protestors in 1993 to stall logging operations during the largest civil disobedience action in Canadian history.

Edited by Christine Lowther of Tofino and Anita Sinner of Sooke, Writing the West Coast could have been called Writing Clayoquot. More than half of the memoirs and essays emanate from the Long Beach area; most of the rest are from Vancouver Island. Off-Islanders include Susan Musgrave, writing about Haida Gwaii, and Alexandra Morton, writing about Orcas in the Broughton Archipelago.
978-1-55380-055-2