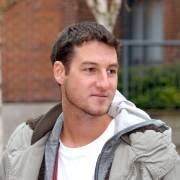 
A staff reporter and editor for the Georgia Straight, Travis Lupick published Fighting for Space: How a Group of Drug Users Transformed One City's Stuggle with Addictions. The book details a grassroots group of addicts in Vancouver's Downtown Eastside who fought for two decades to transform how a city deals with its most marginalized citizens. In the process, decision-makers were forced to treat addiction as a health issue rather than just for the criminal justice system.

Lupick's journalism covers drug addiction, harm reduction, and mental health - all topics he has written about for the Toronto Star, the Walrus magazine and Al Jazeera English. He recieved the Canadian Association of Journalists award for best overall investigative report for his work covering Canada's fentanyl crisis.

Last year's winner of the George Ryga Award for Social Awareness was Wade Davis for Wade Davis, Photographs. This year's winner is Travis Lupick for Fighting for Space: How a Group of Drug Users Transformed One City's Struggle with Addiction (Arsenal Pulp).

The 2018 shortlist also included: Gary Geddes for Medicine Unbundled: A Journey through the Minefields of Indigenous Health Care (Heritage House) and David Suzuki and Ian Hanington for Just Cool It! The Climate Crisis and What We Can Do (Greystone).

The Ryga Award presentation ceremony will be held at the main branch of the Vancouver Public Library on Thursday, June 28th, in conjunction with the presentation of the George Woodcock Lifetime Achievement Award.

In alley near Hastings and Main is a shadowy brick canyon. Used needles lie on the pavement. Its puddles hold an ammonia reek of urine. Along one wall, a man and woman scavenge in a dumpster.

Most people across Canada know by now that Vancouver's so-called Skid Road was a neighbourhood east of Gastown where hard-drinking loggers, miners and mariners rented rooms and partied.

Some survivors became pensioners, living in its modest hotels. Amenities included pubs, diners, theatres, and Woodward's flagship department store. There was a community spirit in spite of petty crime.

Later known as the Downtown Eastside, the area became notorious as Canada's locus for opioid addiction and overdose deaths. But these days there's an upbeat story that deserves telling.

This downtrodden neighbourhood has led the way for introducing harm reduction measures for drug users and many of the mentally ill, the addicted, the sick, the disabled, the homeless and the poor have found comfortable lives in the Downtown Eastside despite the drawbacks.

Travis Lupick, a coordinating editor for the Georgia Straight, is a quiet presence at the cafe. He lives nearby and reports on events in the Downtown Eastside. While working this beat, he got to know many of the grassroots activists who prodded three levels of government into authorizing and funding harm reduction measures.

Then, in 2014, the poet, community organizer and former Vancouver Coastal Health board member Bud Osborn died and Libby Davies, longtime MP for Vancouver East, announced her retirement. As well, executive directors Liz Evans and Mark Townsend of the Portland Hotel Society, a nonprofit they founded and led for many years, unexpectedly resigned.
Lupick decided it was time to tell the stories of the drug users and allies who agitated to change Canadian attitudes and laws over two decades-including Osborn and Davies.

He spent six months producing a manuscript, mostly composed on his laptop at the Lost + Found. "I can't work at home,"; he says. "This kept me rooted in the community that it's about.";

Now his Fighting for Space: How a Group of Drug Users Transformed One City's Struggle with Addiction (Arsenal $24.95) highlights a cast of Vancouver residents who helped destitute drug users get basic housing, clean needles and a supervised injection site.

Their ideal was the progressive Swiss version of harm reduction. The good news is that, overall, harm reduction measures, medical care and detox services kept many drug users alive and as healthy as possible, giving them the option to quit hard drugs on their own.

Lupick includes chapters about the opioid epidemic in various U.S. cities, and various attempts to introduce harm reduction in the face of the intensive war on drugs. Meanwhile, in Vancouver, Portland Hotel Society staff members literally saved lives by resuscitating overdose victims in the run-down hotels they managed.

Lupick was inspired by British journalist Johann Hari's Chasing the Scream: The First and Last Days of the War on Drugs, a wide-ranging read that includes chapters about the Downtown Eastside. "I read that book in almost literally a single sitting,"; he says. "His central thesis is that prohibition and criminalization of drugs actually do more harm than the drugs themselves. And he fleshed that idea out with characters and anecdotes.";

For a different take, he read Literary Outlaw by Ted Morgan, a frequently unflattering biography of the Beat satirical writer and self-described junkie William S. Burroughs. "I wanted that kind of honesty in this book,"; Lupick says.

A third key resource was Gabor Mate's In the Realm of Hungry Ghosts: Close Encounters with Addiction. Mate, a physician, spent years treating injection drug users while on staff with InSite's detox program. "His idea that prohibition is victimization,"; says Lupick, "that most drug users, at least down here, are just self-medicating for past abuse or past trauma, that was an idea that I tried to weave into the book.";

Lupick, at 32, is a Georgia Straight veteran. After he loaded bales of newspapers and toiled in the office to finance his political science studies at McGill University, he started reporting, mentored by editor Charlie Smith. He also gained an international perspective by freelancing in Africa for two years.

"I put a lot of pressure on myself to do justice to the people who were giving me their time and sharing their life with me,"; Lupick says. "I saw that people are being pushed to the shadows, pushed out of housing, pushed out of the health care system. We don't treat drug users like human beings...";
Fighting for Space covers the 1990s overdose crisis and its aftermath, when powerful heroin killed thousands. The current overdose crisis is worse because cheap synthetic opioids, fentanyl and carfentanyl, are more deadly. Some 1500 overdose deaths are predicted in B.C. this year. Most supervised injection site users must still get drugs from street dealers.