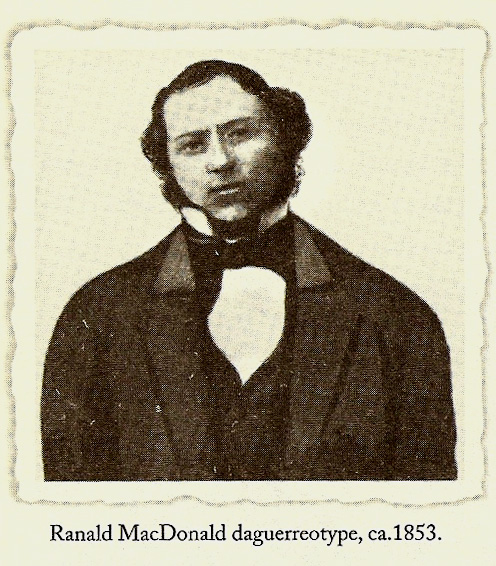 
The remarkable, sad tale of Ranald Macdonald's life as a bois brule, or "half-breed," is a rare, documented case of the plight of a mixed blood offspring on the Western Slope in the 1800s. As the son of Scottish-born fur trader Archibald McDonald (who spelled his surname McDonald, not Macdonald) and Kaole'xoa, the daughter of Tillamook Chief Comcomly, Ranald Macdonald lived most of his life above the 49th parallel and aspired to become the first Indigenous author in the Pacific Northwest.

Macdonald's mother died not long after he was born in Fort George, Oregon in 1824. It has been suggested that Ranald Macdonald was unaware of his Indigenous ancestry until his late teens or early twenties, but this seems unlikely given his father's chronic worries about his welfare, as stated in letters to his fur trade peers such as Edward Ermatinger. "All the wealth in Rupert's land will not make a half-breed either a good parson, a shining lawyer or an able physician, if left to his own discretion while young," Archibald McDonald wrote in 1836. Three years later, having sent his son to Ermatinger's care in the small Ontario town of St. Thomas, McDonald confessed, "I cannot divest myself of certain indescribable fears...." McDonald's plan was to give his son some training as a gentleman in Ontario: "If he can only keep out of egregious acts of impropriety til we can once more have him back in the Indian country, I shall consider it a great point gained.... Here... he may just crawl through like the Black Bear does-lick his paws. We are all most unfortunate parents."

In 1853, Ranald Macdonald gained a position as a bank clerk but felt estranged in Ontario, "while sitting, like a Simon Stylites, on my high stool in the Bank of Elgin, with little money or means...." When a white girl rejected his advances in St. Thomas, Macdonald began to be worried by his mixed blood. He began to wonder about the fate of three shipwrecked Japanese sailors he had seen as a boy at Fort Vancouver in 1834. Allegedly believing that Japanese were "similar to the Indians and probably ignorant, so that an educated man might make himself something of a personage among them," he hatched a very unusual plan. Rejecting the uncomfortable prospect of alienation in either Ontario or Indian country, he opted for service as a sailor sometime in the early 1840s.

To make better sense of his own life, Ranald Macdonald reputedly theorized there was a racial link between North American Indigenous peoples and the Japanese. Consequently, after spending several years at sea, Macdonald secured a place as a deckhand on an American whaling ship that would be passing in the vicinity of Japan.

During a period when foreigners were prohibited from entering that country, Macdonald arranged with his captain to be set adrift in norther Japan with a few books in a small boat in June of 1848. The story goes that the captain of the ship only agreed to Macdonald's foolhardy request after Macdonald granted him his share of the whaling profits from the voyage. At age twenty-four, Macdonald subsequently found himself marooned on Rishiri Island, near Hokkaido, and presented himself as shipwrecked. Seeing his books, the Japanese apparently assumed he was a scholar of some sort, and spared his life.

During Macdonald's ten-month stay in Japan, he was taken to Nagasaki where he taught English to 14 scholars prior to his deportation in 1849. It was Ranald Macdonald's tutelage that enabled the Japanese to understand Commodore Perry when he arrived in Japan several years later in 1854. In Japanese documentation of his visit, there is no reference to Macdonald's mixed blood background. For one exotic period of his life, he was able to gain acceptance and respect. Upon leaving Japan on an American ship, with the help of a Dutch mediator in Nagasaki, Macdonald worked as a gold miner in Australia.

Making his way back to British Columbia, he variously worked as a packer, road builder, rancher and ferryboat operator. He also took part in the famous Vancouver Island Exploring Expedition in 1864. In his declining years he retired to Fort Colville, Washington, where he had spent time as a child. He died in 1894 and was buried in a small cemetery near Toroda, Washington, just a stone's throw from the Canadian border. Ranald never married, but his siblings and their descendants were numerous.

Ranald Macdonald has since been credited with writing an autobiography that was, in fact, a concoction of notes re-shaped after his death. According to Juliet Pollard in BC Studies, Nos. 91-92, "Much of the manuscript was not written by Macdonald, but was the work of another fur trader son, Malcolm McLeod, an Ottawa lawyer, who, with Ranald's assistance, incorporated Ranald's narrative into various manuscripts of his own. In the course of this undertaking in the early 1890s, the elderly McLeod, who had never been to Japan and the aged Macdonald, who had lost his Japan notes, turned to other books, especially Richard Hildreth's Japan As It Was and Is (1855) for inspiration. At times the borrowing "bordered on plagiarism...." MacDonald was so anxious to get his narrative published that he gave editorial control of it to his sophisticated and lettered colleague McLeod.

In order to encourage positive views of Indigenous peoples, Malcolm McLeod, who was a mixed-blood himself, inserted passages about Christian charity and brotherly love in his friend's memoirs, adding his own suppositions about racial links between Japanese and Aboriginals (which were later credited to Macdonald). Upon discovering Ranald Macdonald's handwritten version of one of his co-written manuscripts, William S. Lewis and Naojiro Murakami allegedly reinforced the notion that Macdonald was motivated by a desire to make racial links between the Japanese and "Indians," as outlined in a foreword to McDonald of Oregon, a fictionalized biography by Eva Emery Dye in 1907. Dye chose to spell the surname as McDonald, in keeping with the father Archibald's surname. Lewis and Murakami switched the spelling to MacDonald for their purposes, but Ranald himself had preferred Macdonald.

Ranald MacDonald was a loner, a seeker, an indefatigable world traveler and the product of a complex cultural, ethnic and national amalgam. It is not surprising that his true history and personal motivations remained a fascinating mystery for historians of his era. Although he had scholarly and literary aspirations, Ranald MacDonald was a man of adventure rather than of words.

The term Métis was not used much in frontier British Columbia and Macdonald's heritage was not French. Instead the term Sitkum siwash, in Chinook, was more commonly applied and was translatable as half-breed. Siwash became a derogatory term in the 20th century. Hence , Oregon writer Helen Krebs Smith wrote Sitkum Siwash: An Historical Drama about Dr. John McLoughlin of the Hudson's Bay Company and his Family at Fort Vancouver, 1839-1851 (Lake Oswego, Oregon: Smith, Smith, and Smith Pub. Co. 1976). This title seemingly does not have a British Columbia connection but, in fact, Macdonald's fascinating life brought him north of the 49th parallel for most of his days. Krebs also wrote The Presumptuous Dreamers (1974) and other titles.

The unparalleled, bizarre and tempestuous life story of Ranald Macdonald has been more extensively researched by the well-respected non-fiction author Don Gayton in an unpublished manuscript, Columbia Son, including Macdonald's chequered past in British Columbia (where he mostly lived), in Washington (where he died) and in Oregon (where he was born). Macdonald's wanderings as an enigmatic and troubled figure are as fascinating as they are sociologically significant; there's no other documented account of how someone with "mixed blood" endured on the "Western Slope" more than a century-and-a-half ago. Gayton writes: "Theories abound as to why MacDonald went to Japan. Some say he conceived the notion of a racial link between his dead mother's Chinook peoples and the people of Japan. Others think it was from childhood associations with a couple of Japanese fishermen who were caught in an intense Pacific storm and blown all the way to the Oregon coast. Still others think his motive was simply a desire for adventure."

MacDonald, Ranald. Ranald MacDonald: The Narrative of His Early Life on the Columbia Under the Hudson's Bay Company's Regime; Of His Experiences in the Pacific Whale Fishery; And of his Great Adventures to Japan; With a Sketch of his Later Life on the Western Frontier, edited by W.S. Lewis and N. Murakami (Spokane: Eastern Washington State Historical Society, 1923).