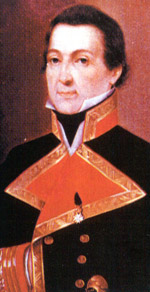 
"Who's heard of Malaspina? The tragedy of his voyage was that this enormous mass of material he gathered did not come out at the time."; -GLYNDWR WILLIAMS, HISTORIAN

Born in northern Tuscany, at Mulazzo, in the Spanish-held Duchy of Parma, on November 5, 1754, Alejandro Malaspina was the second son of the Count of Malaspina. He was christened Alexandro Malaspina but later adopted an alternate spelling of his first name. During the 1760s he lived for several years with his family in Palermo in the home of his great-uncle Giovanni Fogliani Szorza d'Aragona, the viceroy of Sicily. Malaspina was educated in Rome at the Clementine College, managed by the Somaschi Fathers, from 1765 to 1773. Accepted into the Order of Malta, he spent a year in Malta learning the fundamentals of sailing prior to entering the Royal Navy in 1774. He participated in various Spanish battles and sailed to the Philippines, rising in rank until he was denounced to the Court of the Inquisition in 1782, suspected of heresy. These accusations were not upheld and he continued to distinguish himself in the navy, participating in the Spanish attack on Gibraltar and making a second voyage to the Philippines, this time as second-in-command, in 1783-1784. He undertook cartography on the Spanish coast in 1785 prior to his world-wide voyage from September 1786 to May 1788 in the frigate Astrea on behalf of the Royal Philippine Company, by way of the Cape of Good Hope, returning around Cape Horn.

Upon his return, Malaspina's ambitious nature was evidenced by his 1788 proposal for a two-ship expedition to visit almost all of Spain's Asian and American territories, in concert with José de Bustamante y Guerra. This 'Plan for a Scientific and Political Voyage Around the World' would ideally bring as much glory to Spain as Captain Cook's voyages had given Britain. As a product of the Enlightenment, Malaspina was an intense rationalist who held the position of Associate Correspondent of the Royal Academy of Sciences in Turin. Whereas Cook's voyages had yielded a three-volume report, Malaspina would aim for an eight-volume omnibus. With José Bustamante y Guerra, he sailed from Cádiz on July 30, 1789 in the Descubierta (the Discovery) and the Atrevida (the Daring). These two corvettes, built especially for the expedition, were named by Malaspina in honour of James Cook's Discovery and Resolution. Throughout the second half of 1789 and all of 1790, his crews gathered extensive scientific and ethnographic information while visiting Spanish American possessions that included Montevideo, Port Egmont, Valparaiso, Callao, Guayaquil and Panamá. The expedition's artists would later include José Cardero and Tomás de Suría.

Unfortunately for Malaspina, his thoroughness contributed to his undoing. Prior to embarkation he had sent José Espinosa y Tello to conduct archival research into all preceding Pacific voyages. Espinosa had uncovered a copy of Lorenzo Ferrer Maldonado's Relación of 1609 that contained Ferrer's bogus account of his alleged voyage via Davis Strait to the Strait of Anian. Malaspina rightly dismissed this account and set about his high-minded task, sailing forth with an unprecedented assortment of scientists, and the latest surveying and navigational equipment.

Upon reaching Acapulco in March of 1791, Malaspina received new orders from the King of Spain. Instead of heading west to the Hawaiian Islands as planned, Malaspina was instructed to sail north in search of the Strait of Anian as reported by Maldonado. Whereas Cook's crews were necessarily loyal in hostile territories, Malaspina's men could leave their jobs much more easily during their frequent visits to Spanish enclaves. More than a dozen of Malaspina's men deserted at Acapulco upon learning they were not bound for Hawaii. Malaspina, a sceptic, resented the 'wild-goose chase' to explore the coast between 59º and 60º north but he dutifully sailed into the Alaskan waters already visited by Captains George Dixon and Cook. He reached Port Mulgrave and mapped Yakutat Bay, and would later examine the coast as far north as Prince William Sound.

The artist Tomás de Suría reported great excitement at the end of June when, much to Malaspina's surprise, their expedition discovered an apparent opening that might be the long-sought inlet to the east. Two launches, provisioned for 15 days, were sent to investigate the potential continental passage on July 2, only to return almost immediately, stymied by the looming presence of the Hubbard Glacier. The inlet was a cul-de-sac of ice. Malaspina took formal possession of the glacial area for Spain, he made detailed hydrographical surveys and he recorded valuable ethnographic information about their meetings with the Tlingit, but Malaspina called the place Deception Bay.

Detoured by Maldonado's artifice, Malaspina, a meticulous surveyor, blamed speculative scholars for continuing to hamper the efforts of practical mariners such as himself. Ironically the explorer most leery of non-scientific maps had been victimized by them. Discouraged, Malaspina sailed south in August to Nootka Sound, spending a month with Chief Maquinna and the Mowachaht at Yuquot, at which time Tomás de Suría made his famous pencil portrait of Maquinna, and Malaspina's longboats explored the Sound's channels. The navigational charts made by Malaspina while anchored at Nootka were among the nine Spanish maps that were later provided to George Vancouver.

At Nootka, Malaspina and his officers wrote extensive reports about the Spanish garrison and the Mowachaht, and described Chief Maquinna: "The character of Maquinna is difficult to decipher. His personality seems simultaneously fierce, suspicious and intrepid. The natural tendency of his inclinations is probably much disturbed on one hand by the desire of the Europeans to cultivate his friendship, the treasure he has accumulated in a few years and the discord between the Europeans themselves, and perhaps their attempts to obtain a monopoly of the fur trade; and on the other hand, the weakness of his forces, the skirmishes suffered, the usefulness of the trade, and the too frequent presence of European ships in these parts.";

Malaspina headed south to Monterey, San Blas and Acapulco, reporting his failure to find the Strait of Anian. He headed across the Pacific in December, reaching Guam, and proceeded to the Philippines where his men passed nine months making extensive reports. Bustamante sailed in the Atrevida to Macau to make gravitational observations. After 62 months at sea, Malaspina's expedition returned to Cádiz on September 21, 1794. During his five years abroad, Malaspina had accumulated 450,000 words in his journal. He was received by King Charles IV and Prime Minister Manuel Godoy in December, then promoted to fleet-brigadier, but Malaspina's progressive nature and liberal proposals were soon at odds with Godoy. Foreseeing the potential value of the British Columbia coast, Malaspina counselled Madrid to settle the area. A liberal before his time, Malaspina also suggested Spain ought to dispense with military domination and establish a confederation of free trading states, a Pacific Rim trading block that could be managed from Acapulco.

Malaspina's downfall was a letter he sent to the Queen suggesting Godoy ought to be replaced. When Godoy learned of this opposition, Malaspina was arrested in November of 1795 for plotting against the state. After an inconclusive trial, he was imprisoned in northern Spain, sequestered in a remote castle from 1796 to 1802. While confined, Malaspina remained active as a writer on subjects that included economics, literature and aesthetics. Napoleon and Francesco Melzi d'Eril successfully lobbied for his release in 1802. He was freed on condition that he would leave Spain. Malaspina travelled from Genoa to his hometown of Mulazzo in March of 1803, settling in nearby Pontremoli where he took an active interest in civic affairs. Malaspina was entrusted with organizing a response to an outbreak of yellow fever and later appointed Advising Auditor of the Council of State of the Kingdom of Italy in 1805. He received further honours, including the title of Addomesticato, to the Columban Society in Florence, prior to his death in Pontremoli, on April 9, 1810.

Malaspina's magnificent journal was suppressed throughout his lifetime. A subsidiary portion appeared in 1802 but all mention of Malaspina was expunged. The complete text of his five-year report wasn't published in Spanish until 1885. A three-volume edition has been translated for the Hakluyt Society in association with the Museo Naval, with the final volume dealing with the northwest coast. A Spanish biography of Malaspina by Dario Manfredi, translated by Teresa and Don Kirchner, has been made available on the internet and Vancouver's John Kendrick published a biography in 1999. Malaspina's political writings, most notably Axiomas políticos sobre la América, are being translated.

In deference to Malaspina's enlightened character and his largely unheralded pursuits in physics, astronomy and political philosophy, Malaspina University-College in Nanaimo has been named in his honour. As directed by Malaspina, the schooners Sutíl and Mexicana under Captains Dionisio Alcalá Galiano and Cayetano Valdés explored the Straits of Juan de Fuca and Georgia, an expedition that gave rise to the name of Malaspina Strait between Texada Island and the Sechelt Peninsula-even though Malaspina had never entered the Strait of Georgia. The Alexandro Malaspina Research Centre was created at the University-College in Nanaimo in 1999.